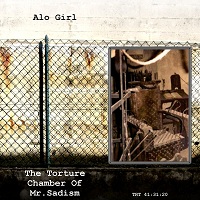 Italian wall. Alo Girl is a noise/HNW project of Cristian Renzoni. This person is also responsible for Urashima label that already became famous for its excellent high quality releases. Mostly HNW and mostly vinyls. This disc was released as one of Irritant series albums in Italian Toxic Industries label in edition of 33. One could clearly associate the title of the album and German horror movie from 1967 - "Die Schlangengrube und das Pendel" or "The Torture Chamber of Dr. Sadism". I don't quite remember the movie itself, but there was something about a man who was sentenced to death because of the fact that he killed several virgins. And he returns from the other side to take his revenge or something like that. More than 40 minutes of wall in the disc that is divided into two untitled tracks. First of these - short, playing for less than 3 minutes, brutal static, consisting of low frequencies and crackling, raised above it. Usually such short tracks of HNW only irritates me - stimulates the appetite and leaves, but this one goes quite well with such playing time. The second wall, stretched through the whole album - almost 40 minutes of not that brutal and intensive statics. Fundament of sound is made of low rumbling and non-changing canvas of one-colored noise hiss. It changes the color and become more intense when about one fourth of the track is gone. Sound becomes similar to listening to rolling avalanche of stones when it's raining cats and dogs. At about the middle of the track, the space suddenly narrows and all images of rain and rolling stones disappear. You're left with weird, claustrophobic feeling. Album goes to the very end in such similar sounds. Space of the album is broken several more times. Claustrophobic feelings are gone, but waves of anxiety comes. Weird album and weird wall. When I usually listen to HNW, I become calm and go with the sounds to wander in my own thoughts or in labyrinths of album conception. I don't know what's happening while listening to this album. Worry and uneasiness are the main feelings, it seems that you're being strangled, you feel how you suffocate and how you fear of something... Release is truly worth your attention and I don't know who is to blame for me being lost this evening in the chambers of anxiety - Alo Girl, insomnia, frequencies or something else.