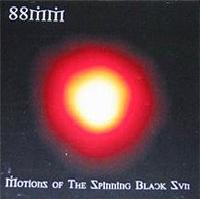 What an unutterably strange album! First of all I'd like to mention that the name "88MM" I've heard before just from two compilations - ADR and Satanic Skinhead. These compilations themselves were of very high quality and the fact that 88MM was included there speaks for itself. Motions of the Spinning Black Sun though, is the debut full length release. 88MM is an original combination of cosmic, mythological and nationalsocialistic themes, mixed and served to listener through experiments and manipulations with analog synthesizer. The result of all this is what I can hardly stuff to any existing boundaries of music styles. I guess the perfect description is from the label - it sounds "“if Tangerine Dream collaborated with MZ.412”". And it is true. It is the middle between dreamy cosmic meditation and harsh industrial sound. Between writings of Guido von List and parades of nationalsocialists. Between two poles of human and cosmic being - in that intersection, right in the middle of the Black Sun exists this album. Evolving and holding balance through perpetual spinning and moving. Where else is the oddity of this album? In the structure. Album consists of 88 pieces. "Real" songs, though, there are only 5. (Haven't I heard one of them in Satanic Skinhead compilation titled 14 showerheads 1 gas tight door?). This particular song (here untitled) finishes the CD. Over 80 songs in the album, beginning with the fifth, are just 8 seconds of cosmic silence. After these the last song follows. The first and fourth are named by their principle of creation - sequence manipulation 1 and 2 and next to them - more picturesque titles. Yes, sequence manipulations sound there. Fussy analog melodies with samples on top that nears the album to nationalsocialistic themes. The third song is named after the galaxy M104 (I guess). In the center of that galaxy the black hole exist. So the fields for interpretations are wide. To take it as a whole - it is really interesting debut CD of this mysterious project. From cosmos to gas chambers, from jews to spinning Black Sun. These movements are memorialized in this debut album of 88MM. Odd meditation for those who are not afraid to be frozen in cosmic nebulas or to get lost between mythological symbols.