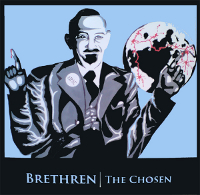 This release was the first vinyl in discography of Brethren. Since this is just the third release of this power electronics terrorist from USA, it is not that hard to notice the progress (2003 - CDr, 2005 - CD, 2008 - 10"). These facts talk for theirselves. True - The Chosen - rather different recording comparing with previous. Within Death You Will Be Free was more like searching, experiments and primal passion. Savagen Inequalities - mature studio album that revealed the real potential of Brethren - structurized, harsh and with hate spitting vocal release. This vinyl consists of two long pieces, inspired by straightforward projewish article "Straight Talk from a Jew" from the 17th number of Resistance magazine. It is really weird and long article where the existing vision of the world being ruled by jews is put black on white and the reasons behind all that explained. This article, worth a separate analysis, is being used as lyrics of The Chosen. Having in mind the length of that article - the album is almost uninterruptible vocal attack, screamed in unique, Brethren'ish, aggressive manner. Musical side - loops weaving one with another, interrupted by high squeaks or destructive wave of vocal. A side - aggressively calm and not overloaded - several changing noisy loops with some improvisations. On the other side of the vinyl - no sign of that conditional calmness - attack of aggressive rhythms that suddenly stops, repetitive words screamed from the depths of David's guts (some places similar to Zionist Axiom from Audial Decimation Records compilation) etc. Since I was not following the lyrics while listening to this record for the first time, when I turned the vinyl over from A side, I had to try and find the place that Brethren shouts. Because it seemed as the B part would be an angry answer to the article, set forth on the A side, but my theories were wrong. Why do I say that this album is different from those before? Maybe it is because of the length of the tracks that from the first sight it seems that these songs are not that structured and more loose. But it is not so - both sides - like a solid monolith of sonic aggression without any cleft, hollowed out from a stone. There is a DVD+R with a movie "Understanding anti-semitism" together with the vinyl in the release. I think there is no need to try and describe what this movie is about. It simply adds itself to the whole conceptual totality of the release - from projewish article, where without any joking an attitude of jews towards the world is explained, to the movie, which explains why such an elitistic attitude and jews are disliked. Fully completed idea and fully fulfilled release. The more this guy is angry, the better release he spits out. Now there's just to wait for a new Brethren work that should be out very soon.