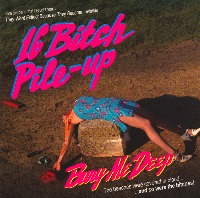 Burry Me Deep is the first full, professionally released album of these USA women psycho noisers. I am not unique, I guess, to be at first attracted by the cover of the album. Contrastive colors and the ladies, performers themselves I guess, covered in a la blood and killed in various positions in CD booklet. Real fiesta of splatter from some good exploitation movie. There are 9 songs in this album. The beginning of the album - almost 4 minutes of whispering, moaning, unclear murmurs, sounds and waves with samples, coming up in random places - clapping etc. The first song creates the atmosphere and stands as a prelude to the second - the longest one. It is 18 minutes of ambience song "The Dead Boy Would Not Go Away" with crackles and rustles, that create rather weird mood. As for me this song is the most beautiful and haunting of the whole album. Though slow and calm, but with some feeling of anxiety. Dead boy does not go away anyhow... It's interesting how would it influence the dreams. Further is short, 40 seconds song, where the passing by steps and squeaking of iron doors are heard. Doors close and the sound in the next song become more intense. I would say, there are mixed various field recordings - drone of motors, rings, various technical sounds, creating more and more schyzo mood. "The Brown Soil" is the 5th song - again, the mix of strange sounds, murmurs and delirium, nightmarish dreams in the rainy night, when the body after many days of alcohol usage is stretching in convulsions under the cold sweat. In the background the ring is constantly heard while the heart starts beating and the 6th part of the album - "Something Poked Up" - begins with this motif. The ticking clock, arhythmic with the beating of the heart. At last these two rhythms distorts completely, the dogs start barking and women start laughing in the background while only the clock stays. Then - the shortest and perhaps the creepiest part of the album - 7 seconds of scary shout of the woman and then the real nightmare comes - screaming, squalling which calms down after some time and the fastened Barry Manilow "This one's for you" is the only thing that left. At this place of the album I don't already know what to think and in the strained nerves and completely distorted reality wait for the upcoming surprises. It seems no more surprises, enough. Just the last moment in the album, like the credits in the movie. It is 23 seconds of "The Dead Boy Would Still Not Go Away". After this listening through the album, the feeling is really, like after good, shocking movie. The head is conditionally empty, but somewhere in the background unsettling thoughts buzzes. And that song of Barry Manilow... I don't even know how to recommend this album, it is a must to live through.