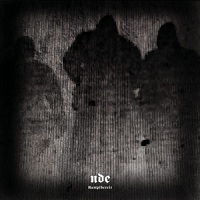 NDE is not very well known (or at least not for me) industrial duo from Belgium, but one way or another they have already two discs in Cold Spring. One of the members of the duo is behind the Dead Man's Hill, dark ambient project that I remember as not too interesting and not of highest quality. Other names tell me nothing, but I'm curious what could be the reasons that the legendary label decided to give a green light to them. Description says that in Kampfbereit there is less martial and more death industrial and, truth to say, it's good. Maybe it's not very good that this death industrial is quite average and though I spin the disc for quite some time already, I can barely find what to hook on. Of course I'm not the one to say that there's something bad with music or so. Industrial is quite good quality, decent rhythmic parts, neat tracks, tightly distorted vocal and even all the concepts seem to follow strict order and go by the canons, but that's it. Maybe it's my taste because black industrial, praised by worshippers of MZ.412 and co is something alien and distant to me. And this is what I find in this disc. Though its playing time is only slightly more than 40 minutes, it tires me with its emptiness. Disc starts from calm rhythmic tracks that are untitled, if I'm not mistaken, and ends with them. Basically the formula for them is pretty simple - distorted layer of several synth notes, then the rhythm appears and we add black-ish vocal with some effect. Vocals are not just screaming, but sometimes shouting the text in melody too. And this goes through all the tracks. Sometimes rhythm of synth disappears and instead of them samples are used, but in essence it's very thinly layered (though I’ll repeat it once more - good quality) faceless clone of MZ.412, Folkstorm and related army. I've read that it's about misanthropy, brutality of life, searching for truth etc. Well, maybe, but it's presented in such a dull form that I cannot get it anyhow. Maybe 6th untitled track is sort of exceptional. Because of feedbacks, lack of rhythm, darker sounds and calm vocal, few minutes of more interesting and painful music is born. And it's not that different after that. But I'm sure this project has its fandom and got plenty of positive reviews, especially from magazines, blogs etc. done by metalheads to metalheads because they somehow like this sort of music. Ah, there's also a remark in the presentation of the album that their focus is on music. Most likely my equipment filters out all the good frequencies from the album and leaves me with boring ones and that's why I can't get to the goodness of this album. One of those works that I'm finally very happy that I've done with it and I won't have to spin it any more.