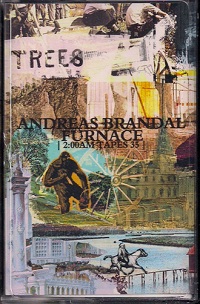 Sometimes I have a hard time understanding some releases with editions not reaching even 50 copies. Of course that's possibly the optimized amount of albums for potential clients of small labels, but it's truly disappointing to listen to some poorly done amateurish electronics, released in hundreds of vinyls or CDs when editions of works by the one Andreas Brandal often don't reach even three-digit number. I've been thinking about that while listening to his tape "Furnace". There is very little information about it and the label I suppose does not even exist anymore. It's not quite clear where to get this tape, but the material in it is absolutely top notch. When we talk about dark ambient or similar music, it's very rare that a record attracts me. It is very easy to install several virtual synths, add some reverb, make a cover with a sere tree and here we have yet another general ambient album. However when you look towards the Northern Europe, usually you get the darkest and highest quality music of such kind from there. Andreas Brandal is no exception. Furnace - ghostly surrealistic journey through the cities of weirdest dreams and thoughts, slowly flying with the sounds of Andreas Brandal music. It is one of those rare albums where cover ideally fits the overall album mood and it is not just a separate visual piece of art that comes with the record. Collage made of photos and pictures, denying perspective and distorting the apparent visual reality. There are 4 tracks on each side of the tape. They are named in short, one word titles. Subtle and fragile field recordings merge with slightly melancholic, slowly changing melodies and in this junction, blind darkness is born and it is such a wonderful feeling to drown in it. I think the format itself adds to the quality of sounds because even those static synth notes are so pleasant to listen to and sink in their softness. From what I've heard from Andreas Brandal's creations, one of the most endearing aspect of his records is that he does not try to stuff your head with sounds, samples, chords, to stretch the track into nothingness, using these same elements of sound and so on. It seems that one could listen to some primitive four-note melodies that exist on this tape for hours and days without stop. But they appear in the overall context just for a second and disappear. You stay hungry and willing for more, but Andreas leads you further and you drown into even weirder and more beautiful sea of sounds. Even the length of the track is not "ambient-like" - 40 minutes tape and 8 tracks. But every detail is so precisely placed in this record that it seems as if one additional sound would destroy this miracle and this whole tape would become worthless. Very rarely I get such a feeling while listening to some records, but I cannot call this tape anything else but the work of a genius. If you get shiver when you hear sounds a la Beyond Sensory Experience et al., try and get this tape. Alice in Nightland.