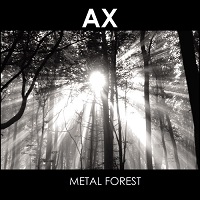 I don't know how many people have heard the title AX. Perhaps it's just me to whom this title said nothing. But after mentioning Anthony di Franco, Ramleh, Ethnic Acid, JFK or Broken Flag, situation becomes much clearer. This project has released three albums in 1994-1997 via now non-existent UK label Freek Records and part of the material from these releases has been remastered and published in 2012 by Cold Spring as a CD. For me the title of the album sounds quite uninspiring and I doubt I'd choose to even look at the release with a band name and title like this, but more than an hour of music in disc is well worth attention. 9 tracks, belonging to the same area of stylistic mood, are nevertheless varied and interesting and it is not the first time that I ask myself what is that miraculous formula in sound that still manages to surprise you in quality and thoughtfulness. This compilation is full of heavy and massive guitar drone textures, spiced with pulsations of synth or noise generators and leaning more towards industrial/power electronics sound and even going as far as to harsh noise wall extremes. The first track from the only CD of AX - Astronomy, is perhaps most typical industrial/noise/power electronics track. Anyways, it suits well as an intro to the album, but the rest of the songs in this disc, taken from vinyls, released in 1994 and 1995 hits with massiveness. Blocks of almost static guitar riffs, from time to time cut with feedback, touches of drum plates or distorted synth lines, arranged in tasteful way and presented in the final result. A little surprise was pure HNW track (Theme One). I feel a little weird about it at first, but the rich texture of this track blends with the overall mood and sound of the album and I start to think where I will find more rudiments of HNW. 1985? Even before? This track somehow divides the disc to two parts and after Theme One ends, differently colored material of AX starts. Guitar riffs are still heavy and lazily changing, but there are more additional sound elements, that are not only complementing the sound of tracks, but are put responsible for development of themes. Somehow after getting into the mood with first tracks from Nova Feedback LP, I have quite a difficult time listening to two songs from AXII vinyl. They have more manipulations with noise generators and overall the sound and mood is a little dryer. The principle of tracks remains de facto the same, just layers of guitars are exchanged for synth layers and those two long tracks in the middle of disc, not being very pleasant by themselves, still contrasts with the contents of disc and songs put around them. Finally we return to the material of debut vinyl and the primary mood of oppressive guitar drone. Overall this is a good and solid compilation that had to be released without a doubt -  because of the variety, mood and good sounds, the caliber of musician himself and because it should be heard now. I hope you won't miss it.