Brethren - Within Death You Will Be Free 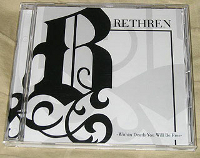 The title Brethren always associates to me with particularly strong, brutal, structurized and simply tearing apart of anger terroristic charge, which can damage you irreversibly. Of all these conditionally new creators of power electronics, for me personally it is one of the most interesting and as I see him - one of the most dedicated persons in the scene. That's why I'm glad to cast a glance a little back and to listen to the first release of Brethren - compilation from live performances, released in 2003 by Open Wound in CDr. And in 2008 rereleased by Audial Decimation Records in CD. There are 12 pieces in the album, i.e. two more than in original release. All of these titles are included in studio album "Savage Inequalities", released in 2005 by Freak Animal, but this fact does not reduce the value of this album because in "Within Death You Will Be Free" all pieces sound not only differently from "Savage Inequalities", but even the repetitive titles in the CD, recorded from different performances distinguishes in different sound. If I understand correctly new mastering was not done for this album - noises of 2003's are left and two songs from the private show from the end of the same year are added. What could be said about the sounding quality itself? It is rather strange. Of course it is hard to evaluate it from the current position when the  album with polished and adjusted sound was heard before this, but these recordings from live performances have some peculiar charm. Hearing the search for the perfectly sounding vocals and the "evolution" of them. Hearing that raw noise, changing from performance to performance. Hearing the song Freedom that is interrupted by a failure of an amplifier... It all gives completely different feelings than listening to studio album. In spite of all that quality, Brethren manages to spit and slap into your face. Pleasant and nice recording that perpetuates the start of one of the strongest projects that derives the inspiration to his creations from pro-white and antisemitic ideas. For those that value creations of Brethren, but didn't have a chance to get the first release from 2003 it is a very good chance to correct this mistake. And greetings to ADR who'd decided to rerelease this album and not to leave it in CDr.