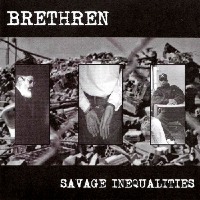 I must admit - this artist took my attention almost accidentally, when I got ORGANIZED RESISTANCE CD in which a person, responsible for project BRETHREN had all vocals by his own lyrics done. Soon the first fully released album of BRETHREN called SAVAGE INEQUALITIES, after some changes in labels finally released by Freak Animal Records, was already spinning in my CD player. CD consists of 10 provocative and uncompromisely aggressive songs. Sound, together with lyrics forms one individable spit into face for all the tolerasts, humanists, fighters for equal rights etc. It is all said in this album, what in nowadays' world is being kept under the cover of silence - it is all the problems of the world being more and more democratic. Racial inequality for the whites, sexual "deviations", unstoppable streams of immigration etc. It is not a rarity racial or political motifs in the scene of power electronics, but also not so rarely it is being used just for some sort of provocation. In case of BRETHREN it is sincere from the first to the last note, from the first to the last word.If talking about the musical side - it is total terrorism. Looped distorted beats, here and there becoming arhythmic chaos out of pulsation; the whole specter of frequencies from pleasant drone sounds to high pitched harsh sounds and also samples. In all this combination of dirtily clean sound, the vocal sounds under very subtle effects. You hear every spitted and shouted word. This album does not slows or stop you, it does not stifles either, it stimulates. There are a few songs in the album where arranging is very interesting indeed. E.g. Bloodland (it is a song of freedom of afro americans from post civil war era with slightly changed words). I'd call it some strange power electronics folklore. There are 4 strophes in a song. One is sung, then sound becomes very silent and little by little becomes louder and louder till the next strophe of text and once again, another sound becomes very silent etc... It's hard to describe, but i'd say very interesting and not typical song. But the most good emotions I get from "Swarm of Ignorance" intro - a lady, talking about rights of women that do not make any sense and after some talking she comes to a conclusion that these women are "an embarrassment to a vagina". It always makes me smile. Album is packed in a traditional CD case, the cover is black-white with 12 pages with all lyrics. Almost 50 minutes pure hate from BRETHREN. The thought was converted to a sound with 100% success. It seems that there is still many good things to come from this artist. Just need to wait.