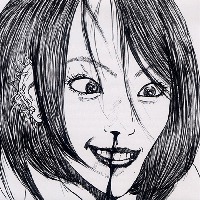 Cracksteel - Japanese harsh noise striker. This professionally released CD was first after some cassettes and CDr. It is rather interesting that in spite of the fashion, often found in japanese scene, to make at least one release in a couple of weeks, Cracksteel has released only 10 albums since 1995. This release - one hour of massive harsh noise - four pieces of similar length. Album begins with rather static "Killing Assault". Regardless of changes of sounds that can be heard in the background, the foreground is rather thick wall of noise. The second part of the album - Inferno - begins with much more energy. The sound changes more appreciably though little by little huge wall of noise is built. It is not that static as in the first song and sometimes it is possible to hear more through it - feedbacks, high pitched tones and even some voices around the middle (?) I am not sure about them. After that - "Valmara Dirge 69" of similar length. The song begins with low, pleasant for ears buzzes that lengthens out to the whole 14 minutes. This one is again rather static part of the album, similar to rather dark painting. Here and there with lighter paint and a small brush one or other accent is put. But without carefully looking one wouldn't even notice it. Sound changes very little, if changes at all, and to notice the whole change of the main theme is possible only by fast forwarding and rewinding from one place of the song to the other and listening to it in separate parts. The last one - "After All". And again, the last part of the album is a little more active than the third one, but without any hysteria. In places sound becomes more intensive and brutal, but then, little by little, transforms in to miry wall of noise. Behind it some life happening is heard, but it's all in the background - just like blood flow under the skin. It looks like for the girl on the cover it flows not only under the skin, heh. Nice cover. And overall I'd say this album is strong one too.