Bereft - Your Messiah Will fail 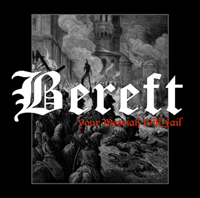 This full length follows Bloodlust! private 7" series release in 2006 "Tough Man". Currently two persons hides under the title Bereft - Peter Lee (who is also responsible for Force of Nature label) and Andy Grant. As with the project of the latter one, The Vomit Arsonist, as with Bereft - I've got to know it just from releases that appeared in 2009, but the impression was really good. This profesionally pressed CDr with playing time of almost an hour is yet another good work from the project. The main idea of the release - somewhat prophetical vision about idolization of people (such as Barrack Obama) and threats that hides behind such actions. Watching the rising disappointment and discontent with government in USA, it seems that this vision of Bereft, recorded before the presidential elections, was correct. There are other aspects of USA politics touched too and it'd be interesting to read the lyrical content, but texts are not included. Album starts with distorted crackling, revealing in the background of uneasy hums and oppressed voice. Not aggressive, but more dark and menacing track. The base of the second one - loop, created with (I guess) noise generator a la "babybox" and addition of various noises and sudden attacks of voice appearing here and there. Somewhere around 7th minute the title song finally explodes and transforms into multilayered noise monster with monotonic hollow rhythm, echoing in the background. The longest track in the album that plays for more than 15 minutes. "Just One Bullet" - dense synth noise and bursts of fierce feedback. "No change in sight" starts with long crackling while after a couple of minutes it transforms into pulsating theme that evolves hardly noticed and finally comes to attack of angry vocals and feedback. Peculiar agony continues and the track ends. The scheme of sounds is similar in the rest three songs of the album. Abuse of noise synthesizer (or several of theme), loops, merging with feedbacks and voice, forming multilayered sonic compositions. "A Wall of Promises" was perhaps the one that I liked most of these three. Deviation towards death industrial, dirty loops, some kind of pseudo-melody and pleasant low frequencies. I'd like to mark out the last track in the album - "Resolution". It's one long composition with playing time of more than 10 minutes and it's a step further from the overall sound and mood of the album. It's one weird track and that weirdness is what I most liked. Perhaps the best track in the album? At least the strangest for sure. Echoing distant feedbacks, interchanging with each other and forming hardly tangible melody. Light touches of noises, strange atmosphere and feeling of wide empty space. Weird experimental deflection, but very very accurate. All in all - Your Messiah Will Fail is an interesting work. Despite the fact that there were some weaker sounding places, but they were quickly recovered and you're drawn into the album with full force. The sound itself for the bigger part was something I couldn't appreciate and I couldn't get my equipment to make it sound as I'd like it, but that's another problem. Of my equipment and/or ears. I do recommend to try this release.