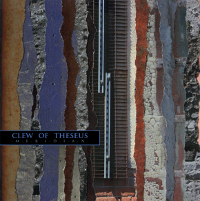 When I listened through this album the first few times - I undoubtly declared it the darkest and the most beautiful album of this year. Regardless of the fact that some time already passed since the first listening sessions, I still spin "Meridian" with astonishment and timidly wander through paths of overrusted cosmos. This is the mood that this album - dark and oppressive, full of unexplainable sounds, experiments with metal objects and noises - gives. When this is put into compositions - the result is simply fantastic. Comparing with other albums of Clew of Theseus - this is without doubt the strongest and most solid work. It looks like it has drawn the "landmarks" for the further evolution of the project and creations of the author. I haven't listened to many ambient-like works lately because in that crowd of experimentators (for most of whom it is enough to push some knobs in their computers) the devil himself might get lost. But the fact is that when the release has a mood and the creative has a goal - it shines as a gold in the mud. This is exactly what happened with this album. I don't even know to what style I would ascribe it. It is completely suppressing, depressing and trampling meditation that lasts for more than an hour with unconscious mind, being tied up and tortured between dirty metal constructions. When rough and violent cries from deep inside is dying to be freed, but it sticks in the throat and starts to tear apart and humiliate physical body. It is impossible to understand this album to the end and it is impossible to describe the beauty of it in words. Seven long, anxious and threatening pieces, created during violent storm and titled not in words, but in symbols not without a reason. That storm is given straightly to irrational origins to explore. For it is impossible to see anything in a rational way. You need to feel it or else you will be crushed by the blowing over storm. Elements does not choose the victims - it destroys everything in it's way. Meridian shows exactly that. Incredebly deep and successful work. Not so long ago I've stumbled upon the preview of next work by Clew of Theseus - Oran. It seems that it will be one more step towards the exploration of the darker side and not less interesting. While writing the review I am sitting here and every couple of words I look through the windows to the sky that is still white, but little by little it gets darker and darker. Grey and black clouds flocks one over other. The smell of wine. The wind gets stronger. There is so little of that white sky and it seems that the night will completely color it in black so soon. The storm is coming. And uneasy dreams. Meridian.