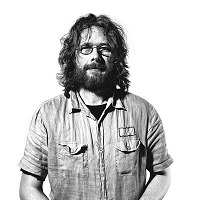 Jazkamer is a duo from Norway. Half of it is a person, well known in a noise world, Lasse Marhaug. Another half of it is a guitar player John Herge. The duo was doubled for this album and two more people participated in recording of this album, both not for the first time associated with the band. Jazkamer changed their title in 2004 to this from Jazzkamer, willing to "get rid of jazz". As for me, the bigger part of their creation works is reflected in such slightly absurd statement. It's a game with words, sounds, concepts, ideas and noises. It is non-pretentious noise, not appealing to some deep thoughts or feelings. At least I get such impression after listening to several Jazkamer albums. So maybe I'm missing something, but this disc is just as I described. The title itself gives away what to expect out of these 50 minutes record. Anyways, the beginning is surprising for it does not immerse you to depths of improvised chaos. Clearly and simply titled track "Sentimental Journey" with playing time of 20 minutes is the longest, most static and calmest track in the album. It's mostly feedback and resonance of a guitar (or at least it seems so) that is left to play on its own on one note. Other sound layers start appearing in the song, but they join in so easily and gradually that it's not easy to notice that thus you continue travelling on that wave of one note. The other part of the disc is more Jazkamerish - loops, noise generators, unpredictable turns of sound, field recordings and overall explosive atmosphere. All the rest of the tracks in this album, apart from the last one, are short ones, lasting for 2-3 minutes, full of concentrated tomfoolery, humor and overall positive lightness. There are not plenty of noise bands that would manage to use humor in such healthy doses and still remain "acceptable" in industrial/noise context, but Jazkamer is one of such bands. Do you need more explanation on sounds in "It is the Nobel Prize I want. It's worth $400.000" or "We Need a Painting, Not a Frame"? I think the titles are talking for themselves - it is difficult to describe them, but you can imagine the atmosphere. And the disc is closed with one long track, which differs from the first one as a day and a night. It is pure full-scale noise/jazz improvisation with drums, noises and in overall difficult to describe chaos. Somehow it "sounds like grated picture" – I guess for this album it is possible to use weirdest analogies and it would still sound good. I didn't write anything about whether I liked this disc or not. Yes, I understand the concept, idea, humor and I hope I understand other small things happening in here, but a little bit too much of chaotic freedom and lack of dynamics does not allow me to enjoy this disc fully. Perhaps my conservative and limited thinking doesn’t let me fly with sounds of free jazz, and I'm a little envious while reading praises for this disc in other magazines, but anyways it is a good quality not a shallow album which will find its way on the shelf. Well, perhaps some time later I'll test my brain tolerance for this sort of music once more.