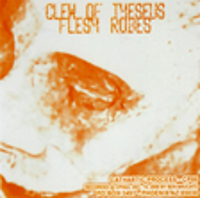 This CDr is the third full release of the musical act from USA, released in the end of not so calm (I guess) 2006 year. Absolutely minimalistic release - all the needed information is printed on the plastic insert which is the cover of the album. In the disc, that is found in it - almost hour long noisy sonic attack. There is the only long piece of pedalic noise, that totally deconstructs and tramples remains of brains deadened of monotony and social vegetating. It is simply chaos of sound, scrubs that you cannot get out of and Clew of Theseus entangles the listener and does not let return back to life healthy and strong. Mainly the procedure occurs with the help of high and middle frequencies, though cerebral haemorrhage is sometimes provoked by striking one and other blow in low tones. White and all other colors and shades of noises, neverending manipulations of frequencies and intensity that does not give a minute of respite for suppliant brains. This is all I can say about this album. I don't know if it had to have some other mission, conception or intentions than complete destruction of thoughts and brains, but if it indeed had something like that then I completely missed it. Because while listening to this I could not get rid of the image of my own skull, splitting into thousands of tiny pieces (like some puzzle pieces) and slowly dispersing everywhere around in space... This is what it gave to me. You drink some water, try to go somewhere with your own thoughts, but they strike against the transparent wall, return back, twine themselves round and present themselves in empty disgusting shape. I've had this album in my mp3 player too, so that I would be able to listen to it while walking in the city and relax a bit listening to noisy variations etc. But I didn't manage to do it with this album, it is simply impossible. It is like energetic vampire, it catches you with its tentacles, decomposes your thoughts and yourself and leaves you like an empty shell. Complete sonic destruction and hell. Straightforward and high quality harsh noise. But... How many harsh noise releases are there to which these same words suit well? It is you to answer.