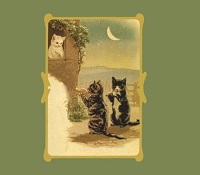 I didn't know anything about Corpoparassita until I sat down to write this review. But after seeing a few photos of a band and reading a few sentences about it, I've spent quite some time exploring weird, distorted and grimy world that they represent. Corpoparassita comes from Italy and the band was found in 2001. In their live performances they use show, performance elements etc. I guess when you look at their photos, you could say that this is not a music group, but overall artistic collective. Browsing through the visuals of a band, one can notice how nicely and weirdly cozy and gentle elements team up with dark and provocative symbols. Look at any cover; let's say the tape, released via Lich und Stahl where black, smiling drops are flying between inverted crosses. The first thing that catches my eye in this album is the cover too. Top notch. Two brindled cats are playing flute and trumpet for the white kitty that is looking at them through the open window. It’s extremely intimate picture, emitting somewhat melancholic and a little sad mood. The title of the album should be translated as "breathing of a tired cat" or something like that. This title adds a feeling of a children's tale to an overall melancholic mood and leads the listener towards sounds. After such long and elated introduction, it would be difficult to criticize the music even if I would have to do that. But I'm glad that Corpoparassita takes away from me this possibility and presents 7 tracks of a decent dark ambient. What does "decent dark ambient" mean? It means sounds that are interesting to listen to and that creates peculiar mood, sounds that draws you in no matter if you are ready for that or no. It must not be something innovative and original. And this album is just like that. Maybe it won't stick out of a bunch of similar drone/ambient names like Bjerga/Iversen or Beyond Sensory Experience that comes to mind while listening to Corpoparassita, but tender phonic touches, distant piano sounds, delayed bass and guitar, gong or something like that, samples of a calm human voice, composed into solid, floating construction of sound and this is what creates a perfectly grey atmosphere and why it is so good to listen to this album. Waving dissonance slowly transforms into harmonic chords that further evolve into colorless sound passages and carry you for half an hour. Compositions are developed so tenderly and subtly in this disc that finally you start to think that it's a bad time to listen to this album. It should've been heard when it was autumn and not spring. And if possible at night. My cat, which climbed on my audio equipment after the disk started playing and went to sleep, and me, are fascinated by this album. I'm recommending trying it for you too.