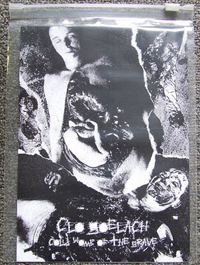 If I'm not mistaken, this tape, released via Waterpower label from USA is the first release of the label and the last one of Lithuanian power electronics/post mortem act Clo Goelach. After this release it transformed into Body Cargo that have already released a couple of tapes via Autarkeia. Well, different conception, different stage though you could notice the gradual change of Clo Goelach for some time already in 2009. It seems that peculiar sound was finally discovered too, which in this tape is, I think, most distant from Clo Goelach's sound a couple of years ago and more resembling Body Cargo.
Edition of this tape is 50 pieces. Packed in oversized zip-up plastic bag with three black/white A5 collages inside. Corpses, body parts and rough black-white aesthetics. Symbolic reflection of the project and album title in the main collage - disemboweled woman and dead baby to whom his mother became his own grave. Accurate. The album itself is not long - somewhere around 25 minutes. All tracks are untitled and they seem like one long atmospheric soundtrack, divided into four parts. Tracks are rather static and monotonous, but suggestive. Especially while listening to these tracks through headphones when you can hear the whole of a sound and no details disappear. Wall of noise with field recordings in the background, rhythmic loops here and there, distant hums, forming thick and massive avalanche of mud and streaming to your ears. This one is without a doubt the filthiest (I think for a reason) Clo Goelach record that I've listened to up to date. It seems that such approach to sound forms dark, oppressive and not aggressive, but somewhat twisted atmosphere. The listener does not receive the sound chewed and served on a plate. Big amount of primal magic and mysticism is still in there and you must analyse it yourself according to your imagination. While listening to this record, sometimes I get the feeling that these are simply manipulated field recordings, recorded into several tracks of a tape in factories, harbours, docks and plains, then put together and released. Those that adore precision and clean sound should avoid this cassette. Those who likes filth, I hope they already had a chance to evaluate this tape. The first track sounds as if it would be recorded in docks. Distant buzz, low rumble, squeaking conveyer, metal banging and intensive rustling, hidden behind the curtains of noise. All that is in the background seems not important because fundament of sound hangs in front, but at the same time, these distant sounds are organic part of the whole. And it goes like that for all the tracks. In the second one, the voice is heard (ain't these the lyrics printed on one of A5 collages?). Voice blends with the sounds and breaks the impassable mud of this tape. On the other side - two very similar tracks. Soft pulsating loops, notes, sunk in noise, absolutely distorted and deformed sound. Both tracks sound monotonous and though they're not that bad and B side goes as if it'd be one decent track, but I prefer the first side of the tape. I once mentioned to Mykolas already his project's similarity to Gruntsplatter, so I'll mention it here too. Right, Clo Goelach, especially in this tape, is filthier, but that dark and sick ambient/noise atmosphere can be felt. I would say Clo Goelach was choked and left to die in right manner. From that same cold grave Body Cargo was born. Though I didn't have a chance to listen to releases of B.C., but I tend to wait for them with high hopes.