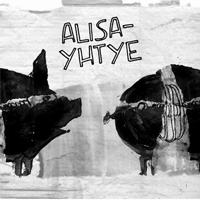 A couple of releases from Triangle Records were standing in the shelf for a rather long time, begging to be reviewed so I decided not to waste more time and take one of them for this evening's listening. It's CDr, packed in the envelope together with xeroxed cutting of some Polish magazine. A woman doing exercises on one side and biography of Alisa-Yhtye on the other. This person is doing noise since 1997, but no titles of the projects rang a bell to me. While exploring the visuals, reading from that cutting etc. I started to think that in this release I'll find some artsy "something" with slightly shizoid noises and I even wanted to put it back into the shelf for another time. And that would've been such a huge mistake! Since the very first second this release simply pushed me into the madness of noise, feedbacks, clanging metal and so on. Absolutely pure
old-school noise. Without any compromises, without incoherent nonsenses, or meaningless and empty details. More than 35 minutes that this CDr, divided into 6 pieces, lasts, sounds like carefully composed and thought out product. I don't know if it's true, but the impression is such. Rich layers of low-frequency noise substitute one another, on top of them - fierce feedback or distant delayed rumpling of metal appears. Despite the fact that this album was released as CDr, it sounds like it was recorded absolutely without any interference of digital technologies - the sound is very soft, massive and dirty. Base of the first track - squeaking sound, as if suddenly pushing brakes of the car. Around the base - the whole track of higher and lower frequencies is formed. Delayed clanging metal and low rumbles. Near the end of the track - low sounds are cut and the sound is left to hang somewhere in the middle range while finally the track ends in almighty destructive wave. The first seconds of the second track cuts the ears mercilessly with feedback and the goes down to the lower part of frequencies to boil in there. Beginning of the third one - the same. Short shock of feedback which cuts your ears several more times during the track, but mainly ecstatic mid and low ranges are dominating in the whole release. I'd like to mention the last track too. It's the shortest one - just 20 seconds. Attack of feedback, white-nose, strange buzzing of seemingly disconnecting cables etc. And these 20 seconds are so full of everything... I doubt that there's a point in describing all the tracks separately for this CDr is made to listen and enjoy, not to write about. For you not to swing happily in the soft feather-bed of noises, Alisa-Yhtye inserts ear-damaging feedbacks or suddenly turns the track into unexpected direction, but all in all this whole release is a solid living organism with plenty of sonic information. Willy-nilly I started to compare this album to japanoise, Napalmed and so on. Strong and with quality. Before listening to this release, I was a little anxious  because there are no titles of songs - no declarations, no one is opposed, nothing is demanded and so on. These sounds are simply the joy of "that fat Russian guy who smokes a lot and likes to drink tea". Thematically I cannot hook on anything, but this record is strong from itself so it's not needed and I think Alisa-Yhtye stands way higher than the whole bunch of pretentious guys with pseudo-misanthropy, piles of corpses and complete lack of anything personal/felt to say. I've already found where to get more records of this Russian. Absolutely recommended release for all lovers of old-school.