The very first thought to offer a release to Arkhe came during artist's visit in Lithuania,
Armageddon Descends festival. More than a half of autumn has passed and this CD is finally out.
Not noisy, but more industrial and weird release. You cannot grasp it from the very first listening.
Just like you cannot grasp the calm, powerful, but frightening existence of taurus when you meet
it eye to eye in an endless silence of the universe. Also - short interview with Arkhe about this album:
http://www.terror.lt/news/1742/53/Arkhe.html

After more than 10 years, one of the most unique Lithuanian industrial projects
releases a disc of autumnish audial melancholy. Long wordless compositions,
rising the morning mist every time you spin the record. Trembling archaic journey
through the listener's senses. No words and no need for them.
There are just guidelines in the fog. And, well, several words in a short interview regarding the release:
http://www.terror.lt/news/1741/53/Oorchach.html

Two musicians, two CDs with 4 tracks in each of them.
It means when you by two, you get them for 22e. For 2+2=4.
Solution is not always the same, but this time it is like that.
More info, requests etc.: info @ terror . lt 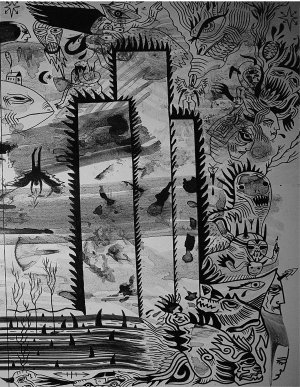 This double tape release was one of the slowest moving projects ever. That's why I'm so glad that after almost four years of struggling, this 4 way industrial/post mortem/power electronics/noise release is finally out! Almost 1.5 hour of sound under the main unifying theme - city. You must not be a genius to see that some of these projects are directly associated with urban motives - because of their aesthetics, albums, live performances or overall message. But truth is, I could not believe myself how good this double tape sounds and what an amazing atmosphere it creates! The best material to date, presented in four different styles. More atmospheric stuff in black tape:
Velemara - debut and only album release via Autarkeia several years back. He presents CMI-style industrial at its best. Seeing him on stage or listening to his releases, you can feel that the spirit of CMI is alive. In another country, another form, another mood, but it's here. Gloomy scenery in blind alley of the city.
HSSK - he does not appear so often with fresh releases, however the person is active in industrial scene for more than 10 years. Though you could call HSSK sounds as post-mortem, the project provides a bit different sound trip with unconventional instruments in this split while remaining loyal to himself. Darkness and desperation is here. Here you see a ray of light and here it's gone in the mist of the city.
White tape with more noisy approach:
VR - in late years, VR (Vidine Ramybe) explores skyscrapers through HNW sounds, but not in here. In this split you find primitive and raw power electronics, right where VR started years ago. And though I don't see huge buildings before my eyes while listening to these four tracks, but damn, they are so full of energy and pain.. Powerful!
Fulmar - debut record. There is not too much you can say about harsh noise, or there is too much and you can start going through all the technical details, trying to put them into one picture. Several live performances in Lithuana and recording. Searching for a shore under waves of noises. And while you are searching, all the people around you, helps you by throwing stones. Alter ego of one pretty well known Lithuanian power electronics act.
100 2x tapes. 14e
info @ terror . lt 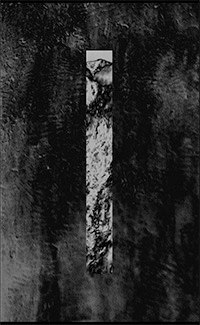