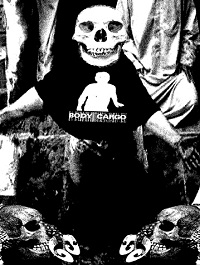 This is the third album of Body Cargo, released in a small, but promising label from USA - Waterpower. Not long tape, with total playing time of 20 minutes, packed in oversized vinyl box and consisting of two tracks - one per side. Body Cargo isn't experimenting or searching for innovations, but goes deeper into exploring filthy aesthetics of cannibalism and magick in his sounds. What can I say - I really enjoy this. Konkrete is, in my opinion, one monolithic work, divided into two sides of a tape. After some time spent listening to the tape, I don't even know and don't even care which side is currently on, what's the title of the track and how technically it was performed. I'm just sitting and enjoying dark, slightly sick and twisted atmosphere that the noise, floating from my headphones, creates. Sounds are moved more into distance with reverb and it seems that it's forbidden for the listener to take part in the action of Konkrete rituals while leaving him a choice to witness it from a side and give up to senses. Slowly changing lines of sound, consisting of delayed synth notes, noises, field recordings and samples are the fundament of this tape. No chaotic jumping between themes, unnecessary pauses or deviations - Body Cargo creates and holds an atmosphere since the very first minutes with enviable self-confidence. If only not frequent changing of tape sides... You can hear shifted down voice on A side - though it's impossible to understand the words, but it seems that the text is unusually long for the artist. Voice seems to be just another instrument in a whole and doesn't distort it, but binds it even more. One thing that I don't like is the sample of women's voices on B side. Twitching of sound slightly dispels an atmosphere and in the loudest places of the sample, unpleasant distortion of voices appears. Also, comparing to other records, this tape is very silent. I had to raise the volume almost twice comparing to other records. But all of this are just trifles, when you have that lulling menace that Body Cargo is drowning you in, in mind. Recommended.