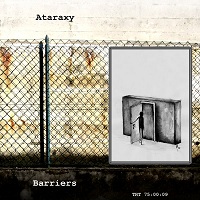 After several not that positive writings about Toxic Industries releases, the time came to rehabilitate this label a little bit. Ataraxy is the title I've seen quite often here and there, though I never was too interested in it. Maybe it's because of the fact that I've been noticing it far too often. The project was started in the summer of 2009 and released around 80 albums to date. I tend to think of such outbursts of releases not as outbreaks of genius, but as lack of quality control, perfunctory attitude towards creations etc. I'm whining about this in almost every review when I have to describe a musician who has suddenly released dozens of albums in a few months. But let it be. Apart from this fact and the fact that concept of the project is absolutely boring ("recordings are directly associated with personal thoughts, interests and feelings" and similar bullshit), this CDr, limited to 33 copies (the usual editions of Irritant series), is quite decent one. There are 5 walls in the album; each of them 5 minutes longer than the previous one. 75 minutes of untitled harsh noise wall tracks. Album starts from strident and quite agile wall. Lows and mids in it are boiling under the louder layer of the upper frequencies. The latter one gets more and more dominant while finally what you hear is basically the one colored layer of noise. But I'm pretty happy that such track with radio statics is only 5 minutes. I'm not fascinated by such sort of noise that is somewhat quite popular in Eastern Europe and Russia. The second wall is nicer. Punch through middle and lower frequencies and roundish, strong and soft sound with episodic cracklings that were the foundation of the previous track. In the third wall you get less lower range and you are left for 15 minutes with sharp wall, leaning towards the upper frequencies, but all in all nicely maneuvering in sound. The fourth track is my favorite. Starting with blow of mid and lower frequencies, it slowly evolves without getting too far from the main axis of sound. It's one listenable and not boring track. The last wall seems to be the continuation of the previous one, cut after 20 minutes because of the concept of this album most likely. Well, at least to me they sound almost the same just more and more layers of sound appear under the original elements in the fifth wall. And if you start the disc from the beginning right away after it ends, the beginning of the first one seems like the continuation of the last track. And thus you get the closed circle of walls with short interruptions between tracks. I would be wrong against myself if I would say that it's difficult to listen to this album. Some of these walls or their elements are quite enjoyable for those who are at least a little into static sounds. There is not that much to criticize in this album, but there is nothing to praise it for. The impression is of an average one with boring concept and it will most likely drown in the seas of HNW albums. Design of this album is minimalistic, in the same template as the rest of the series. Anna Gehmann has drawn some stick figure, opening the door and seeing the wall behind it. So in case you get this album, I think you won't get sick if you listen to it, but you will not loose anything otherwise too.