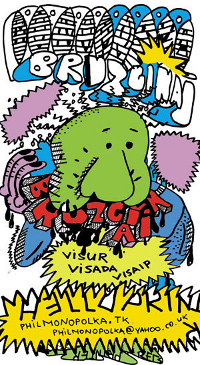 This is the first record of Bruzgynai that I have in my hands despite the fact that I've seen this project live many times. And I can summarize from what I've seen from the latest performances - Bruzgynai is "condemned" to jumping higher and higher over the crossbar that he manages to raise every time he plays. The sound and view on the stage becomes more and more concrete, solid and pleasant to eyes and ears. It is not quite that with this release. "Visur, Visada, Visaip" - cassette with almost 25 minutes of sounds, wrapped in "cover" and released through Russian label Monopolka. I can understand theoretically Arma's view towards noise (or at least that aspect that I see depicted on this colorful cover), but practically I have a hard time trying to emphasize myself into these experiments.
There are pretty too much of everything in this album. Regardless of the fact that only one side of cassette is filled, but during that time - the whole bunch of images and sounds passes by. That, perhaps, matches the title of the album (Visur, Visada, Visaip means Everywhere, Always, In any possible way). In the very beginning of the album - some field recordings, voice, hidden under digitally sounding effects and other weird sounds. After that - sudden and powerful harsh noise attack. After such a calm beginning - this sudden turn really lacerates brains. But it lasts not for long - the cassette rolls and we dive into bushes of experiments. Here and there silent and beautiful sound of industrial is heard, howling, rumbling or echoes of far-away voices strikes the ears. But though I cannot count how many pieces are there in the album, most of all I like the endings of them. During these places, when irritating chaos abates, the point of the piece shows up silently. It lasts just for a couple of seconds, but like a ghost reminds of it's existence. And the end of the cassette leaves the best impression - last several minutes of complete darkness. Pounding of heart, far away gunshots, ruined buildings or factory press and worried high notes blended together results in the best composition in the album. It is rather silent. It seems that it sounds from somewhere below the ground, but I find the core of the album here. In the last piece it is purified - after all these noises, experiments and steady twiddling of knobs - humming monothony, steeping there, where it is darker. Of course, that's just my interpretations, but it is enough for me. As resume I could say that this release would be characterless mediocrity if not the last couple of minutes that let you travel further with your thoughts. Everything else - distracted and didn't let escape. And that cover... Uff...