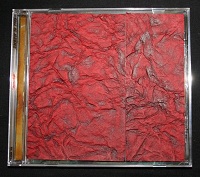 City of Worms was an industrial band from USA that existed in the very end of the eighties. They are told to be the first ones to use live sampling. City of Worms consisted of George Erickson, Steve Beckner and Jeph Jerman. As far as I know only the latter one is involved in so called music up to this day, still expanding the limits of sound and listening conception and quite often surprising with ability to present quite weird things as listenable objects and music in his albums. My first acquaintance with City of Worms was Crumnants tape released on Sound of Pigs. It is a fantastic example of lo-fi industrial, filthy loops and overall bizarre though cozy atmosphere. In 2008 Impulsy Stetoskopu from Poland rereleased 20 year old tape in CDr. Jeph Jerman and George Erickson duo took part in the recording process of this album in 1988. As it is already a tradition - the label presents peculiar design - jewel case, covered in some strange corrugated paper and all the information about album and a band is printed on transparent plastic insert. There are 4 tracks in this disc (the third one is divided into 5 logical parts like it was on tape). The first track sounds like it is a recording from the street. Cars passing by, beeping, voices of children, drowned in dirt and repetitive shout of a man which emerges out of the soft sea of noise and every time I hear it, I startle. The second track is not that intense - several rhythmic loops passing one another and meditative feeling. Here and there above these loops you can hear metal clanks, voices, strings of guitar or something like that, but only repetitive loops gives some sort of shape for this track. Other sounds are more like decorations here. The third track and especially the beginning of it is most alike to the real song - repetitive rhythmic moments, some string instrument, bird shriek etc. Since Quinset is divided into several parts, it is natural that the track pulsates with different rhythms, but these separate parts are joined in such way that you have to listen to it carefully to notice the shift. Otherwise it develops so timely that you slide from one part of the track to another that you don't even notice that. One part is slightly more tribal, the other slightly more melodic, then sounding more like field recordings etc. The sample at the beginning of the fourth track is the most beautiful thing in this disc. It is the sound of a bucket being pulled out of the well when the chain rolls around the wooden winch or something like that. What a wonderful texture and beautiful details! Later other layers of sound are added - distant metal hitting, water rippling etc. until the track is intensified with static synth notes and some abstract field recordings. The last track is my absolute favorite in this disc because of its variety and intensity. But overall it is a very nice album. The sound is very soft and every detail in it suits the overall picture perfectly - gentle caress of noises, monotonous loops leading to meditation, fearsome sounds... The record comforts and smells of the past. I'm very happy that Impulsy Stetoskopu decided to rerelease this tape.