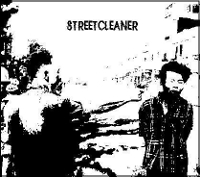 It's a pleasure to present not such a common event in Lithuania - album of power electronics. It is DIY, self-released, limited to 20 copies CDr. Black inlay in transparent case. On one side - the photo seen so much times that it makes my eyes bleed - execution of Vietcong captain. On the other side - spreaded legs of woman and hairy between-legs. Originality not found, but the idea of the title is justified. There are 2 songs of similar length in the album. As far as I understand one is Streetcleaner and another one - Woundfucker. The first one starts with a sample from a movie "In the Mouth of Madness" how every species smell their own extinction. Little by little from under it the massive, full of low frequencies sound is heard. On top of that - twitching rough sound, as if radio transmission through the damaged radio. This becomes, in fact, the main theme of the song. Here and there the vocal under various different effects is heard. "I am the streetcleaner..." After about the half of the song, the sound becomes calmer, one more sample is inserted and the noise goes on. From this place almost to the very end this piece lives through some kind of a break because in the place of massive and not very variable first part, the song now suffers more variations, the vocal sometimes "runs" from one side of speakers to another and finally the song is returned to it's first sound and the cleaning of streets ends. Woundfucker starts with rather long, taking almost 3 minutes sample, from which I understood just that woman is telling some kind of a story about needles. After that once again slowly changing and scaring with low frequencies song, lasting for more than 10 minutes takes place. Here and there a vocal is heard in the background as if praying, but it is rather badly heard. The same situation with samples threw in here and there to the background. Resuming, I could say that both songs are massive and heavy power electronics works. They are not developing too much, not hurrying, without hysteria pressing down the whole 20 minutes. They are not crushing to the final, but they are not releasing too. As for me I liked Streetcleaner more. Because of more pleasant sound and more interesting usage of vocal. But that's my problem. I like pistols in someone's head more than hairy cunts of women.