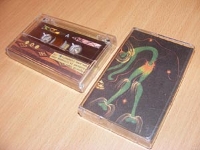 Yet another surprise from Agharta label that constantly tries to breach the boundaries of my understanding about music. This time it's the cassette of legendary musical phenomenon Big City Orchestra hidden under a little different name. According to official information this release is the 79th already from the band though list in discogs counts more than hundred titles already. Big City Orchestra are legends that were released by such labels as RRR, OEC, Drone Records etc. I haven't heard much of them, but one thing is for sure - to fit their releases into some formula is simply impossible. They easily float between styles while experimenting with sounds and noises, arousing imagination and widening limits of understanding. According to the title of the album, this time it is devoted to perpetuation of giants from scandinavian myths. The foundation of this album - loops. Samples, weird sounds, voices and strange melodies are entangled in these loops in such manner that they create warm and shizoidic atmosphere in which, it seems, you could simply splash all the time while trying to catch the sounds and enjoy them. The vision on the first side is slightly clearer - more experiments, consonances that does not fit with principles of harmony, but here they sound so in-place that you couldn't even imagine that it could be in some other way. The beginning of Ymir - soft and melodic loops, but the sound slowly changes. From time to time it becomes noisier, purifying one or another loop in the whole picture while it suddenly explodes into complete noise madness. From that explosion to the end of side A - experiments. Searching for more interesting sounds and testing of sensations. But it has a rather solid and tangible form and I'm very delighted that it does not softens into medley of random sounds. If A side was very live, full of experiments and surprises, side B is absolute opposite. Calmness. Soft and light loops of rhythms, transforming into changing consonances, but not dissipating the feeling of tranquil floating. This musical expression contrasts with samples from police radio, announcing about shot and injured people, but you can physically feel how unimportant, not interesting and meaningless these announcements are. You even start to feel sorry for the wasted efforts while trying to listen attentively what are these worthless humans talking about. Suspect? So what. Somebody injured? OK. This side is like a fairytale, placed in the noisy street of USA city. Just the fairytale is REAL in here, not worried officers in reality. The tale is real because you want it that way. You don't even get when atonal pulsations appear and tries to disturb the whole feeling. All the sounds are purified to one entity and it gives itself for you to live through. Really intersting work and without a doubt the best one from Agharta label until this minute.