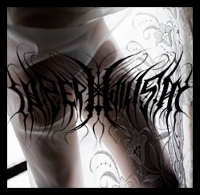 This miniCD is the debut release of project from Shane Broderick. He is one of the members of controversive power electronics unit Twodeadsluts Onegoodfuck. There is a little piece of sonic information in this professionally duplicated disc. Just a couple of tracks that plays more than 7 minutes. I don't know if that should be enough to form the opinion about the project or not, but it gives landmarks and I do like what I hear. The first track begins with a melody of organs which sounds like taken from some trashy horror movie from seventies or eighties. Nightmarish night is over, day is breaking and everyone of us stays in this brightness with our clearly lighted loneliness and personal ghosts. They immediately come to surface and slowly press you to the corner with pulsating, massive waves of analogue. The sound in both tracks is very deep and dense, almost up to the state when you literally feel lack of oxygen. A sample interferes from beyond pulsations which sounds like chanting of sirens while disguised military submarine sails by. Though it is hard to tell what is real and what is not because of denseness of sound. At last the sound of the first track becomes calmer. "These scars will last a lifetime" begins with distant radio noise. You can hear a pulse of a single note through it while the piece, after somewhere about a half minute, explodes. Despite the fact that I'm listening to this record for N-th time alredy and I know what will happen and what to expect, everytime this sudden jump of volume somehow frightens me. Somewhere deep behind the static and condensed wall of sound, the cry of a woman is heard, squeaks of doors, talks... or maybe it was just an illusion? Because hardly anything gets through minimally changing avalanche of sound. But no, there is no need to think that it was harsh noise wall or so. It is a strange mixture of ambient and noise. Sharp, strong, very dense and dark. Finally the stream of sound ends and we are faced with a couple of seconds of pure weeping. Record ends and, surely, leaves you wanting for more. Solid debut work. If I understood correctly, the perch was raised even more during live performance of Corephallism. That's good. Let's wait for other releases of Shane.