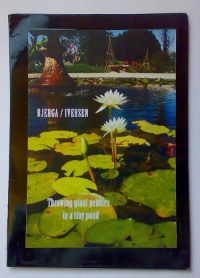 This mini album is short, a little romantisized and melancholic deflection from usual reviewed stuff. I've never heard of Bjerga/Iversen till this record and I don't really know when I'll hear them next time, but after a peak into their discography I was not able not to notice one thing - productivity. More than 50 albums since 2004. Wow. "Throwing Giant Pebbles In A Tiny Pond" is drone/ambient/experimental/abstract meditation with a touch of light sadness, lasting for more than 20 minutes. During the whole album nothing is being said, nothing is being asked and nothing is being answered. The main thing is sound and specific interpretation of it's aesthetics. That's how I imagine it from the creators' side. I couldn't even describe what instruments and sound sources were used during this record. Huge amount of reverb, sounds of metal, strings, intensive and deadened noises, soft feedback... Since the very beginning of the album the sound becomes intensive extremely slowly and so delusively that it isn't almost felt. I catch myself just comparing separate parts of this record though while listening to it, it is rather difficult to think and analyse the sound. Preferably I look to the colorful covers. Water lillies on one side, on the other one - stones under water. Inside there is an insert of lime paper. Several stones and the note on one of them - "hope". I look at it and at the amount of stones on the back cover. Is that the message? Hope is somewhere here, you can find it accidentely, but this plan is condemn to failure. Of course it might be (and perhaps it is so) that this is simply my answers to my own questions and I am cheering because I found both of them in the pond made by experimentators from Norway. The record does not obligate against anyone, even against your own self. Sounds that are suitable for calm and silent nights, for imperceptible drowning deeper, to narsack through own reminiscences and thoughts. Finally, awoke in the middle of the night, you realise that you've found yourself somewhere, in unknown place, by the pond, throwing pebbles into it. "Hope" is written on one of them. To throw it into water so that you could not find it anytime or to keep it. There are no answers.