Barrikad - Where there was fire we brought Gasoline 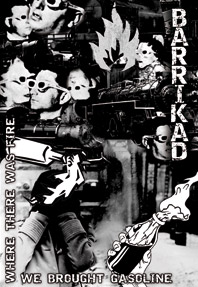 Nil By Mouth is one of these labels which releases are always noticeable because of high quality design and high quality of material itself. This sonic sortie from Swedish anarchist Barrikad is no exception. Sound propaganda in this album is dedicated to exploring Situationism. Well, this is the themes that I am just roughly acquainted with, so I admit that I won't be able to evaluate this release to it's fullness. But for such a case there is 16 pages book "Critique of the Situationist International" by left communism theoretic Gilles Deuve included. Interesting stuff indeed and I doubt that I could get to it in some other way. As much as radically sincere are the ideas, declared by Barrikad, as much radically sincerely cold is this album. On A side there is one long piece during which a sample of woman voice calmly explains problems of the capitalistic world. In the background the noise is being grown. At the beginning, A side is noisy though conditionally calm, but it gradually spreads bigger and bigger anxiety. The sound in contrast with a calm woman's voice becomes harsher and harsher, the number of sound layers increase while the record is raised to the limit of explosion. In the beginning of the B side - more typical power electronics song. Under the abundance of noise, the voice of Barrikad under heavy effects and delay makes his way through. Active and pulsating though a bit dry song. The second one begins with rumbles of low sounds and gradually spreads to huge and wide bucket of sounds. The fundament of the song repeats as if in the loop, but it is colored with peculiar pseudomelody. There is... Order? Like in the title of the song - "Back to Order". The last one on B side is a collaboration with Dead City Rituals, Swedish project that I don't know much about. It is gloomy and noisy, hard and dark drone. The sound that would fit as a soundtrack for terroristic sallie of left extremists with black bandages over their mouths. To generalize this album, I could say that it is worth paying attention to because of rather rare releases of Barrikad (despite the fact that it is rather old unit). But not only that. It is a high quality ratio of sound and thought in beautiful form. What I am sure about and why I write about this album as if walking on the thin ice - this cassette forces you to think and ponder. That cold sound, feedbacks, guitar drone, samples, woman's shoes on rails, 16 pages of theory... It gives you stimulus and compels to meditate and muse upon it. Because you feel that you don't fully understand everything in this dark and repulsive album. You haven't got enough knowledge. Complicated and very good release.