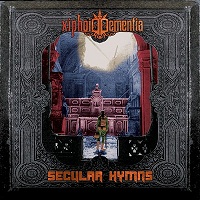 I've praised Xiphoid Dementia quite a few times already so I won't repeat myself how good discography of this USA death industrial project is and how Might is Blight is worth attention. There were a few weaker records after this album, but Secular Hymns, released via Malignant, is basically the next full length album after Might is Blight so I have highest expectations for this disc to be as good. Though Xiphoid Dementia was found more than 15 years ago, it doesn't have an extensive discography and that gladdens me because most of the albums, dismissing my personal and subjective adoration from the whole picture, are fulfilled well and technically strong. It's a difficult question to what genre should one assign this album and the overall music of Xiphoid Dementia for it doesn't fit into any single style boundaries. Maybe a unifying term for this artist's creative work would be cinematic industrial noise. There are four tracks in this album with playing time of almost an hour. As a rule of thumb, all of them are developed very slowly and their complex composition is expanded into attention catching musical pictures, constantly evolving into fresh sound areas in 10 or more minutes. Secular hymns disc starts from "Abortion Rites". It begins with slow dronish passages and slowly builds up while finally in the middle of the track, choir singing loop explodes into multilayered sea of digital noise and after few minutes of intensity, for the first time in this album (I think) you can hear Egan's voice. Abortion rites moves toward the end in slow, noisy steps. "My Time will Never Come" beginning is dominated by rhythmic clock ticking/banging or something like that, obscure creaks and loops of field recordings, richly covered by layers of noise, evolving separately on the carcass of loops and suddenly ending, while leaving pure and naked rhythmic skeleton of the track. This does not change much in the second part of the track, just transforms into primitive and pleasant synth melody with church bells, ringing in background. The third picture "What You Believe" sounds like horror movie soundtrack while you wander in barely lighted spaces where subconscious grabs out non-existing in reality forms and sights, and throws them to your imagination. The slowest and calmest track in the whole album with noise generator layers, samples and field recording loops added only at the very end. The album ends with the most diverse, cinematic and most musical track "Breathe". It slowly gets you spinning in circles of weird melodies, sounds and dissonances and leaves you there. Yes, Secular Hymns is as strong as Might Is Blight. It might even be more mature and stronger. I'll think about it. Of course the tasty and nice digipack design adds to the overall atmosphere. It's a lovely, maybe a little romantic and bombastic journey to the depths of human unconscious.