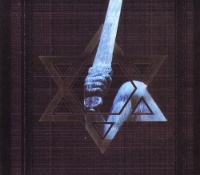 I came across this project a couple of years ago and it happened because of themes of Barzel that provoked huge discussions here and there throughout the internet. As a matter of fact I was rather surprised too because this artist from USA, armed with pro-zionistic ideas, side by side with all the other politically oriented projects in the power electronics scene, takes a rather unique position. This album (amalek of all the many meanings it has, also means enemies of the Israel) "Born to Destroy Amalek" is the latest release of his, made on Israeli based label Topheth Propheth. It is the second album in the discography of the artist and it took five years to complete it since the debut one. It's not new that releases that deal with extreme political attitudes are often depreciated "in principle" or so. I am not jewish and I will never fully understand the idea spreaded by Barzel, but by that what I see and what I hear, I can form an opinion that it is clearly fullfilled - beginning with the design of this album (the cover leaves no questions) and ending with almost full hour of hateful odes of power electronics, dedicated to enemies of Israel and to Israel itself. The sounds that I hear here are more dark philosophical thoughts than plain and straightforward brutality. The most aggressive song is "Born to Destroy Amalek". Under thick shell of noises the title of the song is repeated like a mantra over and over again. In the very end of this song the sound becomes calmer and ends with several layers of samples and one unbinding phrase - "And the war went on". Everything else in this album - gloomy visions, rich with samples, mostly from speeches and reports with the main idea - revenge. For the biggest part the mood itself is created because of these samples because the vocal is not used in so many songs. E.g. the song "Ha' Shomer (The Guard)". The sound - pulsating synth and two samples being braided on top of it. Two eyes for an eye, teeth for a tooth... Another such example - the last song in the album - "We Shall Wash Our Feet In The Blood Of The Wicked". On moody musical/noisy background one idea is declared that the revenge is an important value. And yes, I wouldn't like to describe one and every piece in this album - it is a bunch of dismal incitement for revenge, wishes of strength to Israel, slow, dark songs, from time to time dissecting ears with noisy salvos. Non typical, good and really powerful album the idea of which I see fully completed.