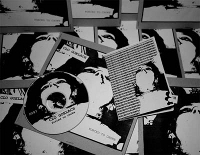 2009th was harvest time for Clo Goelach - productive year in releases. Splits, albums, compilations etc. While I was preparing to review this CDr, released by Clo Goelach himself in his KlaustroSignal label, a cassette and a 3" CDr preface to the album appeared on 100% Unsocial Records. Yield is ok if the quality does not suffer and hearing this particular release I can tell that it seems the most solid release of all.
However, this might sound paradoxical, but the sound of this lithuanian project, calling himself "baltic filth" is the most american one from what I can remember listening lately. I cannot dispose of analogies with Slogun, Deathpile etc. Since you can find a bunch of people who does not like that type of power electronics, another half adores it. As for me, though there are no innovations in sound in this CDr neither thematically nor soundwise, I listen this release with pleasure. Sluggish, hardly variating, filthy and massive seas of noise and effected vocal and samples, burried somewhere below. That would be the formula for all the tracks in the album. While listening to this CDr it really seems that Clo Goelach wants to choke you under the heavy blocks of sound. E.g. the voice in Little Cunt, in my oppinion, is burried even too deeply under effects and merged with the whole mass of noise. Because of that, this track lost its aggressive beauty. In other songs vocal is done better and for Filthy Scum I don't have what to reprove. As for me, the last and title song in this release - "Forced to Choke" bother me most. Vocal is recorded here like with too much gain, effected and raised far above the fundament of the sound. It woud be ok, but it is processed in such a strange way that it seems it was recorded through the built-in microphone of the laptop and I cannot get to used to it anyhow. Truth is, when the song goes towards the end, it "explodes" and a wave of noise bursts which develops further without vocal, but this song appears to be the weakest one from the album. So, if I could leave first and last songs apart, the whole core of 4 middle songs is really strong, where Clo Goelach, with concentrated agression, declares his own attitude to the world, diluted with misogyny and antireligion. CDr is packed between two huge stapled sheets of carton. There is also a black/white booklet with lyrics or excerpts from them and illustrations for every track included with the release. As all the aesthetic of Clo Goelach is expressed in contrasting black and white pictures, so and this album. Either you'll like it right away, or never. There is no choice in between.