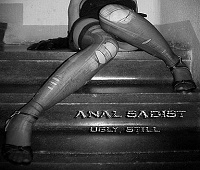 Anal Sadist is a project of one ex-member of cultish USA band The Haters, William Christman. Despite the fact that this project is alive since 1988 and played live with such noise musicians as Merzbow or Hijokaidan, discography of Anal Sadist is very modest. Just a couple of tapes, appearances in compilations and now - a CD of this quite interesting project, released by Impulsy Stetoskopu. As always from the label - the CD is packed in original manner - 8 page booklet with CD, information about the release and photos of means of fetishism, put in an envelope of glass-paper. Playing time of the album is almost an hour and 15 minutes and covers a decade of Anal Sadist activity - tracks from tapes, live recordings and never published tracks. First two songs are taken from the debut tape of the project, released in 1989. Filthy, mostly drowned in low frequencies, loops of several seconds. In one of the interviews, Anal Sadist tells that mostly samples from movie dialogues, manipulated to unrecognizable were used in the first tape, so probably this is the case with the first two tracks too. A rather weird start, but something hooked me up. The next four tracks were taken from another tape - Chaw/Shotgun Head. Chaw - loops of feedback, in places multilayered - sound moves to the upper region of frequencies for a while, but not for long. Important - hard to describe abstraction of sound somewhat leaning towards academic ambient/noise, but with its own beauty. Train-Wet Amped - a song with arabic motives, somehow reminding me of Muslimgauze at first. Sample about army of Iraq, a loop of some sort of flute and finally it explodes in all its beauty - in pure filthy power electronics atmosphere. Very good track. From here, loops are no longer the driving motive of the album for several tracks. Truth is - it's good for repetitive manner of the whole album, with minimalistic variations, might start to get slightly boring. From the sixth track, Met, the album is filled with good quality harsh noise - excerpts from live performances in gigs with Merzbow and Hijokaidan. And finally getting back to loops - a couple of unpublished tracks - loops, samples, drops of noises and filth. All in all, this CD is a really decent work. Though some of the tracks were rather dull, others were equally strong. Let's take this last track - The Poor Sap (Remix) - purified energy and anger. I'm not saying I was fascinated by this album, but it was truly an interesting acquaintance with this oldschool project.