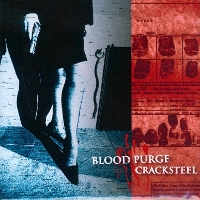 Chi Omega Institute - a label from Japan - remastered and rereleased this cassette, dedicated to massive annihilation, originally released in 1996. Cracksteel because of these themes that are close to my heart and because of the fact that he does not become a victim of "massive manufacture of albums" is one interesting and not losing quality projects from rich in harsh noise country. This album - more than 40 minutes of massiveness, beauty and fear for ears and soul. Cracksteel strikes right away with thick salvo of mud and noise, without any roundabouts, now so popular samples or lyrical introductions. This is the title piece of the album - Blood Purge. Very good and smoothing ears first half of the album (album is divided into two parts, each of them around 20 minutes). I didn't have a chance to listen to the first issue of this album so I cannot compare them, but while listening to this piece I do understand why reactions that I've read here and there praise this work and call it masterpiece. Dirty and hard as a stone foundation made from low frequences. On top of it - several layers of middle and high frequencies chaos. But chaos from the good side, when you listen and you are carried away by developing, as if stuck in hermetic flask of evolution, distortions, here and there sounding voice (if I am not mistaken), subtle feedbacks and sound modulations. Stereo record gives for this album even more beauty and doesn't let your ears to rest with this record. Suddenly started this sound attack and suddenly ended. The second part of this album willy-nilly associates to Andy Warhole and his work of the same name "Silver Disaster". Maybe there would be no such associations if I wouldn't have seen references to Lennon on the first issue of this album. Well, let it be. Cracksteel, it seems, since the end of the first part, took a 5 minute break to "reorganize" his "instruments" and tries to strike again. The sound of the second part is different from the first one. After getting used to all-shaking low rumble, this part sounds like being hung in the air because the main part here is based around middle and high tones and layer of low frequencies is hidden below. This creates somewhat darker and more unpleasant atmosphere. The feeling is like wandering in dark and filthy labirynth of network of pipes. In some places the piece even loses it's integrity and something like completely broken rhythm sounds. Silver Disaster, and the whole album, ends also unsuspectably, but no questions left indeed. All that he wanted - already told. Blood purge completed. And the perfect description of this album is declared on the cover. "No Art Inside".