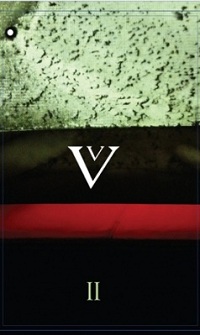 I think it's good that I've never heard the name of this duo; it's the first album of theirs that I listen to and that I can find very little information about this tape on the internet. Ural Umbo consists of two members - Swiss and American. Project was started in 2008 and evolved from doom and black metal to this result that I'm spinning now in my player. Or at least the fundamental point in Ural Umbo biography was musicians' love for modern expressions of aforementioned metal styles. And I said it's good that I've never heard this project before. It's not only because of the factor of mysteriousness, but it's also a solid word, telling that not everyone knows each other in this musical world and overall that this particular world is so wide and beautiful and you can perceive only the little part of it so you should choose wisely. II was released in 2012 via Merzbild label. There are two long tracks in the tape, one on each side. The first one starts from pulsating sea waves and slowly, little by little, leads into melancholic world of Ural Umbo, full of miraculous sounds. Synths and bells, dreamy and sad melodies slowly waves while suddenly breaks and picture of sound cardinally changes. More convenient instruments of metal join the party - drums are slowly added to synth chords, some sparse touches of guitar strings, but despite that, the track on A side still remains drowned in weird and slightly frightening atmosphere. Even more of that strange and distorted magic is added by the looped woman's voice, mood of the track leaning more and more towards sludge and countless layers of other instruments. Sounds become thicker and more intense and you get a feeling that the storm has come, and suddenly everything grew dark. Somehow it's like Nurse With Wound, Current 93, Boris, Alice in Wonderland and Carrie sharing one realm. And the more I listen to it, the more I like it. Visually B side starts as if it would be the evening after the storm of A side – feeling of emptiness, one humming note of distorted bass or guitar, with additional sounds, like sprouts, growing from this seed. This side is a little calmer in sound and more like morbid delirium when you are sweating with high temperature. Pitched down man's voice, repeating some words, strange combination of sounds, starting from organ and ending with some sort of pulsations, and this material is built so suggestively that you don't even catch a moment when you realize that you are already immured in between four sounds walls without a chance to escape. Finally this delirium ends, carrying the tortured imagination in darkened drone sounds towards the end of the tape. This is very visual, very mesmerizing and beautiful work, balancing somewhere in junction of several styles and most likely not suitable for very frequent listening sessions. My zero knowledge of German language, improved by Google translator, tells that the titles of both tracks make one short sentence that would be something like "you cannot have everything" or something like that. Nice.