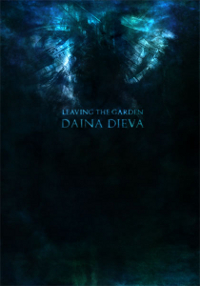 This CD is the first release of Lithuanian dark ambient artist Daina Dieva in physical form so I gladly congratulate her. Digital releases that I had a chance to listen to were very good and truly deserved to become something more than mp3 files. 30 minutes of wander in sounds does not disappoint - calm, evening-like, slightly sad and nostalgic, flavoured with poetic mythology. Slightly widening the canons of ambient in its own way, this release is truly captivating and suits greatly for calm nightly listening sessions. Disc starts with witching and ghostly “Waiting for the snow”. Whispering and waves of droney sea, becoming more and more furious, piercing in dissonances and emotionally rising towards the end of the track. As in this track, as in the disc overall I like that Daina does not overuse her sonic elements, but you are rather left hungry for more sounds. I'd say intellectually and precisely constructed and, perhaps, lived through album. The second song smells of folk motives - "Saulelė Raudona". Poetry in mystified, folk motives, sung above minimalistic sound elements. Good song. Though my ears do not like the voice that is slightly too loud and clear, but soft and pleasant voice, telling a melodic tale, buys me over. The following is the longest track in the album - title song with playing time of almost 19 minutes. Picture, painted in field recordings and ambient/drone, lasts for almost half of playing time while the voice of Daina is heard again. Dreamy and intangibly sad song that enriches the night with light melancholy. The last one in the disc is "Tylioji". It is the track I liked most of all in the album. Voice in this song has kind of ethereal mystery and carries you even further from reality and repetitive theme symbolically loops and ties up the whole album. Booklet with all lyrics and translations are added to the disc. Nice dark, nightly design. What I don't like in this release is the format itself - DVD boxes... But that's perhaps subjective thing. In simple jewel case this CD would look even better, I think. But let it be the only minus of this release that I notice during the listening sessions. All in all it is a beautiful and poetic disc. "Wistfully melancholic" would be two words that would describe this release best. I hope it will be appropriately evaluated.