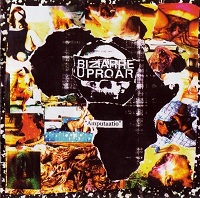 Since the rebirth 10 years ago, very quickly Bizarre Uproar became one of the most important projects in the scene, appearing somewhere on the line between harsh noise and power electronics. And I say that with no exaggeration since interest with Bizarre Uproar releases is very high and you can easily notice that Pasi's label Filth and Violence gives guidelines for nowadays filthiest noise with rightest intolerant ideas and most repulsive aesthetics. These and similar were the ideas that led teenagers to noise more than 30 years - provoking and bringing their manifestos there where it was forbidden to bring them. I'm very glad that Bizarre Uproar stayed there ideologically. And though this project progressed in sound and experimented more and more, changes were only positive. Amputaatio is sort of continuation of Rape Africa that was released in 2012 so the theme of the CD with playing time of 40 minutes, is more or less clear. There are two long tracks in this album and if several years back you could expect brutal chaos of feedbacks, metal and noise, now this project moves in other direction. Amputaatio is very heavy. It is not straightforward aggressive, full of hate and energy. No. It's a result of what happens when you merge drone doom with power electronics. Barely moving tractor-like bass part starts to crush the ears after a few minute sample, then sounds of drums and plates slowly pulls through and such meditation takes quite some time. When you are drowned in these sounds it's getting difficult to notice when the vocal joins. It's just perfect in the title track! It's not too far in front. That seemingly helpless screaming remains sunken somewhere behind the wall of guitars and feedbacks. Then we get more action in the track, drums become more rhythmic and meditation is transformed into more specific shape after one more voice is added to front. I remember the stories about Sun0))) concert in the cathedral of Riga and I try to imagine how it would sound in that same place. If you play music related to rapes in Africa, in a place related to Christian rituals, all this happening would be more colorful than the CD cover of this album. The second part of it is Raiskaa Afrikkaa II (The first one was in aforementioned album from 2012). The beginning is clearer than in the first track. It sort of references to ritual drumming with slowly blossoming out bass guitar parts. Here the vocal appears in a bit more prominent way after the growing of oppressive mood for 10 minutes. Once again, church bells are heard together with almost vomiting vocal and clear squares of drums and guitar, and at this moment I don't even know how to describe this album. But I guess it's not needed. Further on, the structure loosens and the track falls into the lo-fi noise pit where the album ends. Bizarre Uproar started developing in new and unexpected direction a few years back. And maybe not everyone likes that since it's more structured, strict, clear and much heavier at first glance. But the fact is that for more than 20 years this noise act is faithful to his filthy ideas and that's the reason why it's appreciated by the listener. Let it be noisecore, junk noise or current drone/sludge/power electronics. It’s a mandatory record.