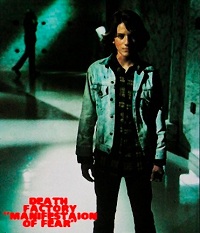 When I read that music in the album is inspired by the movie and especially 70-80s horror, involuntarily I start to think that it'll most likely be HNW. But it's not always like that. Death Factory is Michael Krause's death industrial project from USA, existing since 2006 and releasing an album a year. Chilling Impression is a tape from 2011. 2 tracks with playing time of approximately 15 minutes, dedicated to classic horror movies of the end of the seventies - Phantasm and Anthropophagus. It is released via No Visible Scars label that is constantly presenting interesting new and not so new projects. Tape package is standard for the label - 7" envelope with colorful stills from the movies and introduction by the musician himself where he explains why he has chosen these movies, what his impressions about them were and so on. The sound on both sides of the tape is rather different. A side, dedicated to Phantasm is more or less standard, but decent death industrial. Metal sounds are revealed very nicely with synth pulsations until the rhythmic loop starts which becomes the core of the sound on this side of the tape. Rhythm becomes more intense and surrounding sounds become fiercer. Somehow A side reminds me of Megaptera. It’s the same feeling of darkness and emptiness. Rhythmic stagnation and musical parallels, developing in the background. Though nothing impressive, but it's decent quality dark industrial. The side ends with metal clans, high pulsations of synthesizer and short sample from the movie. B side is quite different. Much weirder and for me it represents the despair and horror of Anthropophagus much better. After listening to it for several times I was still thinking that it was just slightly edited soundtrack from the movie – primitive melodies of analogue synthesizer somehow reminding of Goblin's creations and musical abstractions in the background. This side is not that intense as the first one. It consists of some deviations and constant returning to the same synth theme with additional sound layers - clear and nice sounds of metal, droney synth parts etc. At first it was quite difficult to get deeper into side B because the contrast between strict form of the side A and formlessness of side B is huge. This side is even bleaker, emptier and more oppressive. It doesn't go absolutely anywhere. Just one layer of sound being changed by another layer, echoing notes of synth lines and you are finally lost in this emptiness. B side is more interesting for me soundwisely though lack of any form is slightly disturbing. A side is more easily listenable because these sound structures seem to be heard somewhere else sometime before. Overall I couldn't say that I was highly impressed by this album, but there is nothing big to whine about too. It's the record that would take place between strong averages I suppose.