Brandkommando - We All Love Your Children 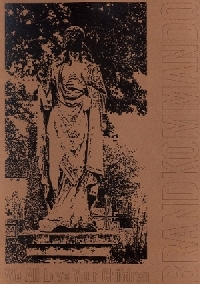 Lately I've noticed the title Brandkommando appearing more and more often here and there. This power electronics unit from neighboring Poland releases at least several albums every year in various labels that chooses their production very carefully. This could mean that the project moves forward and improves. The CDr I'm reviewing was released via R.O.N.F. Records, in the end of 2009. Packed in A5 envelope with the folded cover and the disc attached to it. Nice, restrained design. All in all - 50 minutes of sound in this release. I'm not too well acknowledged with the creations of this project, but from what I can remember, I wasn't too excited about it. This album is an ambivalent one. There are tracks that I like, but there are such that I'd better skip. The theme of the album - Christianity's relation to pedophilia through prism of Brandkommando. Not a new theme, but when you have in mind that Poland is the country with the highest percent of people who follows Christianity and this project is from this country, the report straight from the center of happenings gets you curious. Album starts with a weak track In Vitro - digital flanger effect and pulsating voices, silent buzzing somewhere in the background and that's it. Seven and a half minutes of weird flotation. Radio Maryja is more interesting - low rumble that goes from left to right and back and voice under slightly better sounding flanger effect. And the album goes in similar manner till the very end - calm, trying to create darker or more twisted atmosphere but not drawing your attention. Maybe my personal requirements for albums, exploring such themes are too high and Brandkommando, following the well-troden path of dark electronics + calm effected voice does not convince me. Yes, some of the tracks are rather good ones as for example Mea Culpa or Biskup Pedofil, but all in all the album is rather dull. Especially when Brandkommando strikes with such flat sound lines as in "Only We Can Help You" and so on. It seems that this attempt to get to know this project's better sides has failed. Perhaps I'll have to sit and listen to those releases that everyone's praising and then to try and see where's the problem at. I'd say a mediocre release that you can listen to, but that's it.