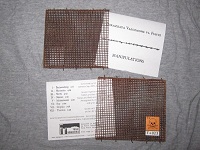 Let's go to Italy for a little while. Manipulations is an album, released in edition of 38 copies, by two rather famous Italian noisers. The playing time is around 40 minutes and it really induces various feelings. Corazzata Valdemone - totalitarian industrial provocateur who is active in the scene for more than a decade and has a discography with quite colorful releases in appearance, content and so on. Fukte - the main project of Fabrizio, boss of Toxic Industries - label that is guilty for releasing this disc too. The first difficult task was to take out the disc from the minimal packaging, enlaced with rusty metal wire without damaging it. Though half of the room was full of tiny pieces of rust, but I managed to do it. The fundament of the sound in Manipulations was done by Fukte in 2004-2009. Corazzata Valdemone added vocals in several tracks, arrangements, lyrics and sound improvements. Disc starts right away from a few seconds of aggressive harsh noise explosion and heart overflows with joy expecting something brutal and interesting. But after a few seconds sound moves towards incoherent rhytms and chaotic noises. Rather weird start, but let it be. I'm still curious what will happen next. The second track starts once again from rough harsh noise that develops in more interesting and more industrial-like direction. After around a minute, theatrical voice of Corazzata Valdemone joins in and the whole picture gets so weird that I don't even know what to compare it to - solemn talking, squeaking of springs and a short loop. The third track has vocals by Fukte and you hear not that surprising, but rather decent industrial/power electronics sounds. Noise is rather thin and concentrated in middle and higher frequencies, but all in all it's listenable. And it seems that the first few tracks presented critical mass of surprises because further on sounds vary in between noises, rhythms and field recordings. The last but one track is slightly different where completely hidden vocal of Corazzata Valdemone shares sound bands with electronic glitches and weird, blue colored lulling sound. Disc is finished with mixture of white noise, guitar improvisation and feedbacks. And? All in all, quite enjoyable work with a few very surprising turns in sound, but balancing somewhere in the average zone. The second track, called Mattatoio (that means slaughterhouse in Italian) stands out. You could clearly hear that Corazzata Valdemone had his feet in neofolk waters too. To summarize it - rather average product that won't be listened to often and that didn't succeed to reveal what these two musicians are capable of, but at the same time, it is not the one that I'd pity a few hours, spent listening to, and writing about it.