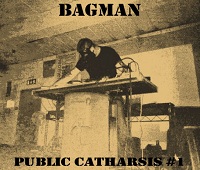 Several months ago I was repeatedly bumping into the name Bagman. After listening to Nyrkki & Kyrpä III with an excellent Bagman track, I managed to grab several albums. One of them is spinning in the player right now. Maybe live recording is not the best choice to get acquainted with the project, but why not. If the album is interesting enough, you can avoid precise sound analysis and so on. Public Catharsis #1 is a visual and sound documentation of the first concert in the project's history. The concert took place in 2011 and apart from Bagman only Bbblood and Pollutive Static titles rings a bell to me of all the participants. There is one track with playing time of more than 20 minutes in the album. It consists of 5 tracks. And I'd say the debut is successful. Disc starts from the sample of well know lullaby "hush, little baby". After some time it is replaced with sounds of dark synth power electronics and effected voice.  Fatal Addiction. Though vocal layer is way louder and other sounds are drowned somewhere in the background, the totality that I hear pleasantly tickles my ears. Finally my memory spits out the name of the project that seemed so similar in sound and overall structure of the release - Section B - legendary German band that was silent for quite some time and from rumors I've heard; now they are preparing the new album. Similar effects on the vocal that does not go to absolute hysteria, but carefully choosing words and declaring own truths, similar dark synth sounds, etc. After the voice goes silent, slowly changing sound part is developed further with the help of samples. When the noise plays out, the excerpt from somewhat familiar song is played. It joins two tracks in a very organic manner. And now it's one of the nicest parts in the album where structured Bagman voice continues to follow the rhythmic frame of the sample and recites the words. Sound is more or less static, with minimal changes, but I hear more feedbacks and overall higher expression so it's truly pleasant to listen to it. Pauses between separate tracks are sewn together with the help of spoken word or music samples. The track ends, sample, the music changes and here we go with the next track. Thus I get the impression of very organic and overall strong and fluent performance. Maybe there is nothing too original in here, but it's a pleasure to listen to this disc. Album is packed in the plastic envelope with 12 page booklet where you see big masked man behind the table with synth, effects, mixer and pile of cables. In the middle of the booklet - some bondage, which is the main theme of his abuse electronics project. A rather new name in the power electronics scene, but it leaves very good impression. Maybe because of the extremely limited number of album editions, it is not that accessible to everyone, but you should definitely follow his activity.