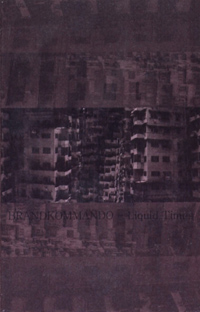 I Only can have good words about this massive album, 66 minutes / 8 tracks, having listened to 90% of this act's discography this one easily became one of my Brandkommando's top 5 works. I think the fact of being a cassette tape helped increasing the bass rumbling on the tracks and creating awesome grim and dark atmospheres, as well as an old school industrial feel to it, oscillating between Death Industrial, Noise and PE getting deeper on the listener than before <B> has got. Droning and grimy synths, continuous noisy tones get layered with processed and often confusing vocals, soft feedbacking, subliminal rhtythms and concrete noises to create suffocating soundscapes... on some tracks you find tension growing until an insane point where you think something terrible is going to happen but never does... reminded me at moments to Maurizio Bianchi's earliest works and Steel Hook Prostheses but without loosing his personal style. Being a 125 copies edition this a very rewarding tape which would be a pity to miss by anyone into these styles Brandkommando deals with.