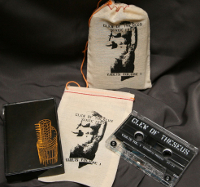 This cassette is the first but still also the only release, devoted to commemoration of Clew of Theseus's decade in scene. The tracks that are in this album - from 2002-2003 not released compilations or long sold out albums. And this is, perhaps, the best Clew of Theseus release from his "harsh noise era" that I had a possibility to listen up to date. Last couple of albums could not be called just harsh noise. They strike much deeper. And this, release of the decade, is like a threshold between THAT and THIS Clew of Theseus. You feel darkness and harmony, going hand in hand with expressiveness and chaos. Why this album and not a whole bunch of others, released by Clew of Theseus seems best to me? Big part of "guilt" goes to medium. Where releases of this musician in CDrs seemed little empty in places or sound seemed not strong enough, the warmth and full sound of the (this) cassette doesn't give you opportunity even to think about it. The other thing - the tracks, chosen for this album are really interesting ones from the carreer of Ben Brucato. Dark and thick rumble of low frequencies, covered by a layer of massive middle noises and squeaking feedbacks or indescribable mad feeling on top of all that. All tracks are placed in dynamic order and makes an impression of the whole and integral release. There are tracks that seems louder than other ones and they frightens with the massive sound a little, but it might be that it is just the fraud of ears after calmer pieces. You can find many things in this cassette - beginning from perfectly sounding crashes of metal, atmospheric howls that makes your consciousness to close and isolate itself from possible intrusion of unknown forces, massive dark textures - ending with the mood itself that doesn't let you go into your thoughts for too long and sink somewhere. After several seconds of complete darkness it loads on your face moving, progressing, anxious and chaotic charge of harsh noise. For me it is one of the best harsh noise releases I've listened to in quite some time - original, not too pretentious, good sounding, carrying never exhausting energy and also marking a specific phase in discography of already not that young project. I recommend it without a doubt! Cassette with black cover, packed in nice linen bag.