* First of all. The beginning of the interview. How would you describe who I am taking interview from. Describe yourself as you find the most (physically, mentally or however) suitable. 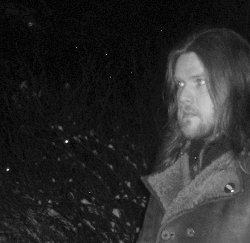 * Haare means "hair" in finnish, yes? Where does this name arrives from?

Back when I started Haare, I wanted a name that no one had used/was using. I found a Klaus Wunderlich lp from a thrift store and there was an advert for a "Haare" lp with a photo of hippies dancing under a huge eye. I realized it was a German version of the musical "Hair", so I decided to use that name. I later  used a slightly manipulated picture of that lp too, on the cover of my "Ceremony" cdr on Foxglove.

* How did the Haare started overall? It looks like during 2006-2007 you've released more than during all the other years put together. And this year there was one record released. Were these two years for Haare the rich harvest of all the thoughts and feelings converted to music and now it is a time for a little slow down or there are some other reasons behind this?

Haare started back in 1999 when I moved to Lahti for my studies, my old band was put on indefinite hold and I started getting more into harsh noise. I hadn't really noticed there were so many releases during 2006-2007 really...some of the stuff is much older but was pending release for one reason or another. There's almost always something in the works, two new tapes (one on Rokot and one on Kult of nihilow) and one lp (on Kult of nihilow & Freak animal) coming soon.

* Haare plays not-so-typical music. There are themes of mysticism, religion (in a way), philosophy and others involved. Also some of the artwork seems to have hindu motifs. Or am I being misled? What is your attitude towards religion overall? 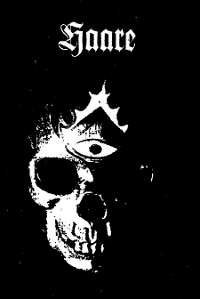 I'm interested in religious art, especially Buddhist. Also, I'm a big fan of all kinds of psychedelic music, and that stuff often has eastern/religious influences in music and artwork. I have been practicing the martial art Shorinji kempo for 11 years or so. In Japan, Shorinji kempo is a registered religion (a form of Kongo Zen Buddhism) and my personal philosophy of life has been influenced by the philosophy of Shorinji kempo. To put it short, people should try to be as good as they can be & try not to be assholes towards each other. I'm not religious, as I think all religion is a form of fascism ("rules of life given from above" = don't think for yourself).

* The image of skull is rather common in your artwork. Could you explain the meaning of this symbol in Haare conception? The symbol of mortality, the death or ... ?

Yes, symbol of death, ever-present. Live your life to the fullest...drink & be merry, for tomorrow we may die.

* In some of your artwork and albums there are also cosmic connections. Do you find the answers or questions or what answers/questions are you in search for and what interests you in this theme?

I don't have any answers but I don't really have any questions either, heh. That theme is also partially inspired by my love of psychedelic music. Also, I think man is a part of the cosmos and we all should have at least some kind of connection to the cosmic side, nature etc. It seems natural to me. There is more to the universe than our puny planet.

* There is one continuous theme I should say through the releases of Haare - hallucinating drugs. In artworks, the colors and through the whole conception. What is your attitude towards drugs overall? Have you ever/do you create music under any intoxication? 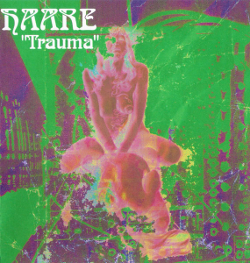 Psychedelic rock can be blamed for this too! I don't do drugs and probably couldn't record anything intoxicated, but I think drugs are demonized too much. F.e. cannabis is just a plant. The very idea of outlawing a plant is completely absurd. I believe that if drugs were legalized, they could be governmentally controlled and drug related crimes would go down.

* In the inner page of "The Temple" CD you've got the text "DESTROY FASCISM". Maybe you could clear this out. How these seemingly non-political overall themes of Haare merge with this?

I come from a punk background, and anti-fascism is something I still believe in. I see anything that strives to dictate what people can or can not do, be it religion, national socialism, communism, whatever as "fascism". Why anyone would want to live under a totalitarian regime is beyond me. Look how well the soviet countries worked...or North Korea...

* Haare played in "Freak Animal Fest" not so long ago. It seems that soon you will be playing in Helsinki. What live concert would you mention as the best for you? Do you prefer live concerts or studio work?

The best gig ever has definitely been at the Freak animal fest. I think that's the first time I've been to a noise gig that was sold out! Gigs are fun, but I prefer studio work cause you can re-do things and correct mistakes...

* What about your own label? "26 Volts Of Danger Recordings". Is it still alive? Any future plans?

26vod is currently on hiatus, but should return at some point. When it returns, next releases will be a cdr by Larma and probably a 3" cdr by a duo called Death system. Larma is total (early) Hijokaidan worship, Death system is short noise tracks, sounds maybe a bit like early Hair police or something.

* Tell me about other project of yours - Golden Vomit. There were releases on "26 Volts Of Danger Recordings". And these were released during your up to date most rich years in releases. What side of you have you put in the Golden Vomit? Is this project still alive? Did it have any live performances? Any information about it? Future plans?

Golden vomit was a vessel for murky, heavy drone, an "unstoppable black lava avalanche", heh. The band has split up because of one member's mental health problems. We didn't want to continue as a duo cause it wouldn't have been the same. There are some unreleased recordings, so a final album may appear at some point. We never played live.

* What are your favorite instruments/sources of sound/effects while creating music? 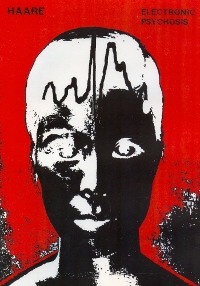 There seem to be stricter "rules" to Power electronics, there are many different types of "noise" but PE is always distinctively PE. I think the idea of "ritualistic power electronics" is fascinating though. Someone should try that.

* During ordinary day do you prefer music or silence? If it is music then what? I guess you don't limit yourself to the boundaries of industrial/noise? What projects/bands/artists would you consider the most interesting through the whole music world?

* What kind of philosophy or (anti)religion is your whole life based around? Or you've compiled your own attitude towards everything piece by piece? Or somewhat else?

I think I answered this one already...see question 4.

* Are you more inspired during the process of creation through inner or outer "irritants". I mean where does the inspiration come from. Outside world or the inner view and feelings?

Bit of both really. Sometimes a movie or a painting can invoke feelings that inspire me to make a specific kind of track, sometimes I just improvise and see what comes out. 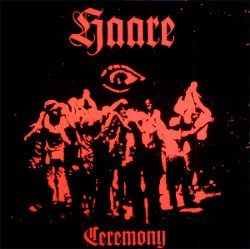 * Overall the Finns I should say are rather extreme in music styles as far as I know. You have very strong black metal scene - Satanic Warmaster, Horna, Clandestine Blaze etc. Not talking about the unique and very strong scene of noise and power electronics. Even Lordi, the winners of Eurovision was an extreme point for that kind of a show. And let's say in your neighbor country Estonia, industrial scene limits to EBM. So where is the secret of Finnish people when talking about all this? Nature, culture, separate important people, history or what? Share your opinion.

I don't know really. Could be the combination of darkness + alcoholism...we're a depressed bunch and sometimes that comes out as aggression.

* How would you describe the world nowadays? Globalization, pop culture, supermarket culture etc. I don't know how it's in your country, but in Lithuania, let's say, there are people who go to huge supermarkets for "sightseeing" and spending of their weekends, children who run away from home to reach these "glamour" places in their very young years and so on. It leads everyone somewhere or it's just normal state of life and everyone's right to choose?

I don't have a car, I don't have kids, I'm a vegetarian and I try to live my life as environmentally as possible to do my part for the planet...but I think maybe it's already too late to change our ways. It seems the world is going to hell. People worship money and are egocentric beyond belief. The planet would be better off without Homo sapiens, as Bill Hicks said, we're a virus with shoes. I believe human life as we know it will come to an end during our lifetime, the earth won't 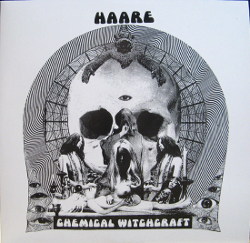 tolerate us abusing it for much longer. We should stop exploiting nature and return to a more rural way of life but the majority of people don't want give up their comfortable lifes. Maybe we should just enjoy it while we can...

James Joyce's "Ulysess", maybe I'd finally manage to get through it there. As for music...very hard to decide...maybe Black Sabbath's "Hand of doom" box (the first 4 albums). And I'd probably take a guitar with me, try to learn to play "real" songs, heh.

* Any last words, future plans, wishes, swears, apologizes or whatever.

Thanks for the interview! New Haare lp "Meditations" should be out spring 2009, keep an eye out. "Destroy fascism, Love forever".