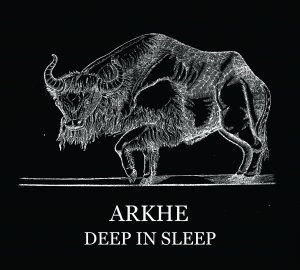 * Let's talk about the latest CD of yours - "Deep in Sleep". First of all - the default question - what was the inspiration for this recording, why and when did it come?

The initial idea I had for the next Arkhe recording, after Downstream and Mars Shines Through Scaffolds of Time in 2015, was to dig deeper into the sounds that I explored on those releases, towards a more low-key experimental, less noisy direction. Many of the original sounds came from allowing synthesizers and effect pedals to work by themselves, let the machines improvise so to speak, and working from whatever results that yielded. Some recording sessions came out like a subconscious stream of sound, and from that I began building the concept and titles. The tracks geared toward a dreamlike structure, certain parts uncomfortably elongated, abrupt changes, having a logic of their own somehow. It was a difficult process to evacuate this album through its birth canals, sessions extended across the entire year of 2016, post-production finished deep into this year, but when I return to it now the process and the obstacles faced and overcome make sense.
I rarely have a distinct plan when I begin recording sessions, more than the urge to being the next project and perhaps a vague idea of how the dynamics or theme should be. (Next up: something completely loop-based and atmospheric, and then something a lot more brutal than I've ever done as Arkhe, but we will see how that pans out...)


* This is the first CD in your discography. Are you in the "format wars"? CD vs tape vs vinyl vs digital downloads vs whatever? Did you choose not to do CD before because of economic/whatever reasons or it's Arkhe's way for that and the project sounds better on analog?

The choice of formatting is rarely mine but the label's; as for Arkhe, I have only done tapes except one 7", on a small label dedicated specifically to that format. The sole LP of Pestdemon was the crowning achievement of my work up until then. I have no real preference when it comes to releasing physical formats, their individual strengths and weaknesses even themselves out: tapes are cheap and easy to produce and ship, CDs are conveniently sized and digitally transferable, vinyl records are pretty to look at but expensive to produce and ship.
The idea of fetishizing a particular format strikes me as childish (I also "worshipped" tapes a couple of years ago). Different types of phonograms were developed as technological compromises or progressions to entice and satisfy a commercial market, they are all flawed and arbitrary in their distinct ways, just vessels for musicians to fill with content. (I've always appreciated the structure of A and B sides of analogue formats, as well as working from the idea of time limitation on singles or tapes of certain lengths. It's a good starting point to work from say a c20, forcing you to keep within ten minutes per side.)
I do not approve of streaming services however, but that is a longer discussion than I can't be bothered having right now. All you can eat fast food consumtion of art, fuck that. I would take my cheap Sansa 4gb mp3 player filled to the brim with carefully selected Magma bootlegs than a premium streaming account feeding off the metadata created by my listening habits. Fuck that!

* "Deep in Sleep" - without any other context and by taking it purely subjectively, I would start thinking about the "sleeping state" of a man vs. "awaken state". Going a bit into more spiritual area. However, this is my impression. What does the artist hide behind this. I see cosmic references nevertheless.

The sleep can be interpreted in several ways. It shouldn't necessarily be considered negative (as an opposite to being awake or enlightened) - it is also be a primal state of infinite potential, like a mental or spiritual heatdeath where everything is equalized and still, before a spark sets off a new creation.
The cosmic aspects of Arkhe have grown the last couple of years. The haunting silence of deep space has always beckoned me, you know? Both the actual abyss above that opens to us at night, and the one that beckons from inside if we listen. (The map included, which I also used on the Rift tape on Cipher Productions, is from the Siberian Chukchi people. It's deceptively primitive, but when you consider it properly, it holds the entire universe.)

* Bull. I can get into improvised answers regarding cosmos, sleep, occult and horror in track titles etc., but this symbol still remains somewhat hidden from me in the context of this album. Can you elaborate about this?

The bull came to me reading a book on Swedish prehistory, a wonderful picture of an aurochs painted on a museum wall that didn't leave my mind for weeks. The aurochs, ur-oxen, Uruz - first rune of the Uthark, the primal lawless force preceeding the chaotic thurs and law-giving aesir, hunted to extinction by our ancestors in the European wilderness centuries ago, the forebears of the domesticated cattle of today (the fehu of the Futhark, jävla fädjur...). There was an obvious connection to the album title, the primordial subconscious force denied or forgotten or simply potential to us. Which is also how I interpret the pre-Socratic notion of archei.
(Interestingly, the U rune can also be derived from Ura, a word for water and rain, recalling the Abzu and primeval waters that YHWH floats above in Genesis. Also, it should be mentioned that aleph, the letter A, derives its name and upside down shape from oxen.)
The animal on the cover is a Polish wisent if I recall correctly, not an aurochs, but nevertheless an imposing beast, also driven to extinction in the mid 1900's and supposedly resurrected into the wild from tame specimen of a similar breed.

* How does the primal exotericism correlates with industrial/noise music? Or maybe it is not that what correlates with industrial/noise music? Maybe the overall theme of the album is somewhat different? What's that? Is there a joining "story" of the four parts of the CD or they are all separate units? What do these units/songs show in their sounds?

One thing I've always been exploring, not necessarily consciously but still, it is there and always has been, both in my music and also in other contexts in my life, are hidden rooms. The spaces beneath the lowest visible level, like in a dream where you walk into your basement where you've been hundreds of times, but suddenly find a door or hatch in the floor leading you into an unknown space beneath. An unseen wraith beckoning you down a medieval stairwell and you have no idea what awaits you. The earliest, lowest, most primitive states of human expression have always fascinated/haunted me, like the ancient forms of polytheistic worship at Göbekli Tepe, or the earliest experiments with computer graphics to convey a narrative dimension, or the first trembling black metal howls of Hellhammer; the echoes of human expression before they are solidified and properly chronicled. This is present in the sounds of almost all Arkhe releases; a search for basic and primitive sounds to convey something... else.
In regards to the album, it has four separate tracks, whose titles came to me more or less spontaneously, inspired by the sounds themselves, certain dreams, and ideas developing from the themes I wrote about above. Together they form a whole but don't go searching for any obvious connections between them: four different faces.