Knurl is a Canadian noise artist who builds instruments himself and by that grants unique experience not only for hearing, but also for seeing pleasure. Another thing is that he never uses any digital accessory in his music. Even the recordings are done without any remastering - the sound is pure and raw as it is. Knurl kindly accepted my offer to give an interview and share his knowledge and thoughts about noise music, his projects and life overall.

* For the very beginning, please, a short introduction. Who are you, how are you feeling today, what do you see looking around at the very moment etc. A few sentences before starting.

My name is Alan Bloor. I'm a welder by trade. TIG to be exact. TIG stands for tungsten inert gas. I weld light gauge stainless steel, brass, and aluminum. Today, as usual, I feel fine. I'm sitting in the kitchen of the house my wife and I own. I see the living room, front door wide open, and the kitchen area. The main floor is open concept.

I'm not a sculptor per se. I never studied it. I just like to bolt steel together and play them, really. I went to school to learn how to weld but not to build instruments.

* A little return back through time. At first you were playing in hardcore/punk band(s). Then 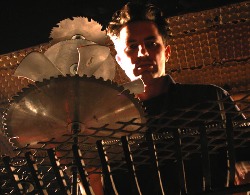 you took the music to completely different level. How did the understanding came that you need to change your sound and music overall and what were the first intensions and impressions? Were there any influences that pushed you to begin solo projects like Knurl and Pholde? Or was it your curiosity about the abilities of sound/music/conception?

I started Knurl in 1994, a few years after I stopped playing in punk bands.I was influenced by the sound of the saws and grinders in the shop I was working in and thought it would be great if you could get a band to sound as fast and furious as that.Not one to be wanting to jam with people again, I started producing noise on my own for my own benefit. I used to make my own cassettes and listen to them myself. One day someone told me I should send some of this out to some labels. I didn't even know any labels existed for this kind of thing. That's when I decided to name the project, and I started sending out releases.

* What is the main idea behind project as Knurl. Is it the beauty of a sound or an expression of outside/inside happening/feelings or you carry some other idea?

The main idea was to take music as we know it and strip it entirely of what we know music to be. Its rhythm, musical tone, production quality, and construction ie: verse-chorus,verse-chorus nonsense.

* What was the very first self-made instrument of Knurl. And what is the very last? 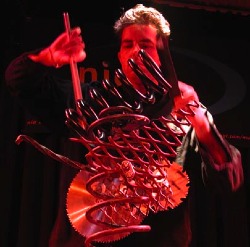 One of the first instruments I made was a small electric fan with contact mics on the screen. I was using the speakers from Sony Walkman headphones as mics and distorting the sound the wind made blowing through the mics. The last instrument I made was a welded stainless steel sort of xylophone thing. It's one of my favourites because it is so versatile. I use it for Pholde and Knurl. It has a great sound. One of the last things I acquired, though, is a three-foot diameter pavement saw blade. It rings like a gong. Sounds very cool.

* Do you collect all the instruments you make or you deconstruct them to construct other ones?

I generally construct instruments for each performance or recording and dismantle them afterwards. I don't have the room to keep everything I use assembled.

* Do you have names for you instruments? Or are these the titles of the albums?

I don't have names for them. I don't feel the need to name them.

* Which type of metal sounds best and most pleasant to you?

Stainless steel seems to sound the best for Pholde, but a thick, heavy steel is good for Knurl.

* Your last album "A Hail Of Blades" which was released through Polish label "Impulsy Stetoskopu". Present it a little. What instrument did you use, how did you record it and maybe some thoughts about the album overall in the perspective of other Knurl releases. Is it different or it's continuum of representation of your sound?

This release was made using circular saw blades mounted on a length of threaded rod.The instrument had two contact mics on it and each mic was hooked up to a separate bank of effects. Thereby giving the sound a stereo effect. It is probably my favourite recording to date. It's got a very intense wall of sound. I think it's quite different from previous Knurl recordings because it was recorded in stereo, something I haven't done since the Paraphasm cassette, and also because there are a few quieter moments with no distortion. 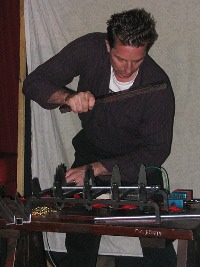 Hearing the "less distorted" sounds of the steel is a nice contrast sometimes.

* Knurl in photos and videos looks very solid and the artist in true industrial mood. You have also done some compilations on some themes like mind-control, religion etc., with various sound terrorists (Death Squad, Con-Dom etc.) though through Knurl you take more abstract attitude. What are your overall thoughts of the artists and projects in political, antisocial, religious and other "influences" from the same scene? Would you consider Knurl ever doing any album in any not soundwise, but ideologically extreme mood?

I have nothing at all against bands with political, antisocial, or religious views. To me Knurl is neither of these. It's sound art. Not to sound pretentious but it's as if silence is the canvas, and sound is the paint. It is applied in vast strokes, not meaninglessly but with thought and commitment.

* I see that overall your instruments are all just like sculptures and not just a pile of junk. So I guess the constructing of an instrument is a part of a release or performance also. They really adds to the aesthetics value also. Is the form important comparing with the sound?

Form is important I would say. Lately I've been into smaller, more compact instruments. I find I can move faster with something small as opposed to some big, hulking piece of metal. I like being able to nuts on something of a smaller scale. I find the sound is more active this way.

* Does the thought comes first or the imaginative sound or it's just conjoined process. Do you have any particular vision of what the sound will be while constructing your instruments or how it will look visually? Or neither one?

I generally have an idea of how I want the sound to be. Lately I've been concentrating more on the effects and what to use as opposed to the type of instrument I'm going to use.I've been experimenting more with double effects, loopers, and recording gear. Working more on the sound quality. Something I eschewed in the past. 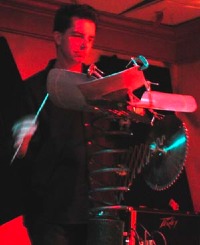 I would define Knurl as more anti-music. That's what its intentions were in the beginning and I still believe it is.

* The music in all. Is the whole music scene not overcrowded? There is so much "myspace musicians" and also the mp3 culture where one seems able to get everything to listen to. Or it is ok and this is a burst of "creative minds". Or was it always, just the information is now more accessible? Or what are your thoughts about this?

I wouldn't say it is overcrowded. I think the bands and artists have always been there, it's just that now we're better able to contact each other instead of writing letters back and forth and discovering each other in magazines and word-of-mouth.

* You seem completely refusal towards any digitalizing. No synths, no samplers, no computers. Is it the saving of the "purity" of the sound or you simply don't need them. Is there any master done to the recordings at all?

I don't use any of those because I like the spontaneity of the sound. That's something I don't think I could get in overdubbing. I don't like to enhance anything after the recording and I've always believed that something recorded should sound like it does live. I've never been a big fan of synthesizers in noise. I don't do any mastering. I record straight to a cdr and burn off the usable material onto another disc.

* Have you ever played outside your continent? In Europe let's say? Is there possibility in seeing you here? And what country would you like to visit most?

I've never played in Europe although I would like to. I'd love to play in Germany and Amsterdam. The only 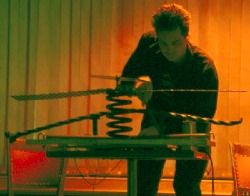 country I've played outside of Canada and the U.S is Japan. I went there in Feb. of 2001.

* Tell me more about your ambient project Pholde. Does it go the same line as Knurl without any interference of digitalizing and what is the conception behind Pholde? Is it being constantly inspired by something or is it just your joy of getting various sounds from various material?

With Pholde I work with the natural sounds of the metal. I scrape and bow the metal as I do in Knurl but with Pholde it's done more slowly and meticulously. As well the tensile strengths of the steel is more varied to give more variety to the sound. I started Pholde as a sort of break from noise. So I don't become swamped in either noise or ambient.

* Future plans of Knurl and other your projects? Maybe any upcoming concerts or so?

For the past year and a half I've been learning/playing violin on my own and have been incorporating that into the Pholde project. I would eventually like to use it in Knurl or even start a solo project with it. I have two contact mics built into it and I've been experimenting with it using two sets of heavy distortion and loopers. I really love the long extended drones you can produce with it and because it's going through two sets of effects and two channels, the sound is vast. 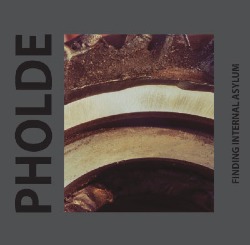 * Tell me a little about your other passion - photography. What kind of photography are you into? (I mean camera obscura and other types of photography). What do you like to make photos of most? What/who is your inspiration and why?

I haven't been doing much photography lately. Time is a major factor. I usually take photos for cover art of releases. I took the photos for the Pholde release Finding Internal Asylum for instance. I generally like macro photography. Extreme close-ups of machinery parts. I still use film because having to go out and buy the lenses and converters I have for my SLR would be way too costly.

* Are you a happy man overall?

I'm fairly happy. I have nothing to be really depressed about. I'm not starving and I'm not in jail.