Mourmansk 150 are the power electronics unit from France, delivering their idea with uncompromising sound and imagery. The project evolved through the time and after 8 years of existence, now keeps spreading their thoughts with agressive sincerity. I am indeed very happy and thankfull to Christopher and Minzo from Mourmansk 150 that they took their time to answer my questions. 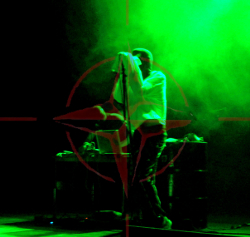 * First of all the few words about Mourmansk150. Maybe some stories, you want to share, outlines of biography. An introductory word. How was the project started and why etc.?

Mourmansk150 has no beginning and no ending. Our “discography” is managed on discogs by our friend, Emmanuel of Nordwaves.

* What about the name of the band? Does it have something to do with the city Murmansk in Russia?

The name (mourmansk, in French) was chosen in clear relationship with the Russian city. Murmansk was a centre of Soviet submarine activity. In fact, it is the world's biggest nuclear dustbin...The potential for disaster in Murmansk is enormous.

* Mourmansk150 has not strict formation is being said in your website. How did all these changes affect the overall sound of the band? Is there someone in current lineup from the very beginning of Mourmansk150?

The line-up has evolved ... like a DNA sequence can evolved along phylogenetic trees...Currently, Mourmansk150 is Christophe B., Julien D. and Minzo S…the 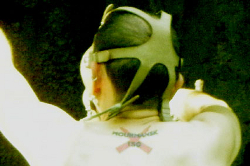 trinity!
More rhythms have been incorporated in the sound of Mourmansk150 since the arrival of Julien D. Minzo S. has written most of the lyrics. Whereas “Catharsism of a trigger” was co-signed by Julien and I, you can consider that “Triumphant over your remains” was our first recording as a real group. We played live without any audience during roughly one hour in studio. “Triumphant over your remains” is like a finalized version of “Catharsism of a trigger”. We are also always interested in inviting brothers in arm to contribute some collab tracks, as we did with Ripit, Lith, aso…
As Mourmansk150 is more than just “sounds”, some VJ were also involved in the releasing of “La guerre, l’anarchie et le chaos”. As for today, Tzii (a Video-Atak’s member) released the video of “des chiens” and Regio Manicomio (from Septic Mesh) released the video of “L’heure du bombardier”. News soldiers!! It’s total war!!
You are also really proud of the limited edition of “La guerre, l’anarchie et le chaos” with the t-shirt and the military bag. There was a perfect synergism between us and Aldo (the manager of Nil by Mouth).

* You are three in a band. Isn't it more difficult than being alone let's say? Or it's quite opposite - everyone is adding his own color to a painting? Or simply it's one man rule and others do what they're asked for? 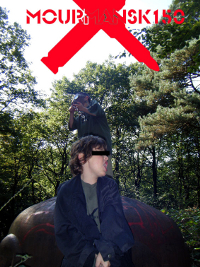 * Who are those children in your promo video of the newest album “La guerre, l'anarchie et le chaos”? Why have you chosen the image of children in this theme?

Our troops!! Our troops have to be educated as young as possible!! To take a decisive action, there is no need to be an adult. Resistance is already obsolete because for the select few who have the strength to resist, there are billions who will be enable to deviate from the "indoctrination" thus making the strategy inutile!

* This your last album seems to have serious anarchist attitude. Moral anarchist Leo Ferre, I guess anarchistic text from Antonin Artaud etc. Your message behind this. Is it the perfect "system" – bringing anarchy over the western society or is it the democratic-ochlocratic anarchy in western world that you see and just state facts. Or some other thoughts?

No, we are not anarchist!! What do you mean by “anarchy”? We can’t stand any authority, that’s all!! We rejected this system a long time ago!!! Clowns ravaged by humor!
When we recorded “Soleil Orange”, I took books of Maurice G. Dantec. Julien played the keyboards while I read some selected sentences…and it doesn’t’ mean that we are catholic!!

* What instrument and sound sources were used in your last album? In some live pictures I saw that you are using laptop too. How do you see computer becoming rather frequent in the acts of noise/power electronics? Is it OK, or is it "loss of spirit"?

The main sound source that you can hear on our last recording “La guerre, l'anarchie et le chaos” came from an analog synthesizer named “MFB-II”. We also 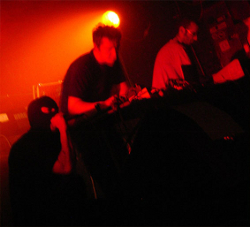 On stage, we used a laptop as a “big” sampler equipped with cubase and wavelab… for the samples (of course!!) and the loops. Laptops are cheaper than samplers, lol. Moreover, it’s quite difficult for Julien to manage all the analogical equipments … whereas I have to deal with “vocal” part. Nevertheless, be sure that you will never listen twice to the same track!!
In the near future, we will try to use a minimal configuration to avoid the use of the computer. In our bunker, Julien is trapped behind a wall of machines but it’s quite difficult to “move” it on stage.

* There is a song in your new album that sounds like a hello to Mikko Aspa - "Fuk Miko Aspa". Is there some serious reason behind this greeting or is it just for fun?

On klosa3 (= last track of “Triumphant over your remains”), we violently attacked Cold Meat Industry…but it’s seems that nobody noticed it!! Arf!! Except the 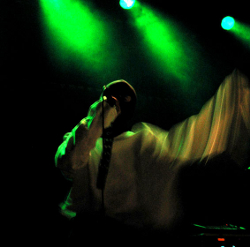 Karmanik familly… motherfuckers!!
CMI is a logo as is Levi's, Pepsi, Sony, 20th CenturyFox etc... Once you establish a logo regardless of whether it is through good deeds/skill or toil your product/quality become irrelevant!
These people can release anything and it will be applauded and mass-consumed no matter what! NoiZ is supposed to be an independent genre but it does not house independent thinking! People are idiots and they will buy what they are told by logo's and big labels!!!

These labels also pilot the scene, they exclude and nullify threats when by manipulating the shit system they pilot/control! This is partly <beside the pedo/porn depravity> hate Miko Aspa and Freak Animals so much because he see's us as a great threat and tried to humiliate/downplay our dominion! This is one of the most pathetic and deplorable levels that a human being can sink to but it is everywhere!

90% of people need to be told what to buy and that includes the Noise scene! That’s how these people operate and that’s how they are successful! Play it as a business and not as a passion and you will be very successful! Place the music and your art first and it is much' much' MUCH less likely! Freak Animals are fucking awful! Almost all there bands are shit I was astonished! It is almost as if he is picking up all the worst bands! 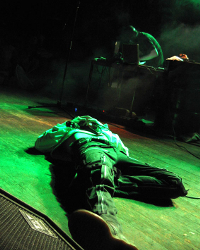 * In power electronics scene there are some artists that take serious ultra political attitude. Like pro-jewish project Barzel, ultra right wing artists like Brethren, Deathkey etc. What are your thoughts about them?

None are familiar so I can’t comment individually. Life and sociology is never as linear as right and left wing. I detest mental cripples that succumb to such primitive and insular monologies. The Jews have a lot to answer to, but also a great deal to respect. Many resent and chide them simply because of their success and distinct racial solidarity. It pleases me that Barzel exist, even if it’s just to rile the myopic dullards that whisper words of hate & loathing from the safe seclusion of the noise recess.

* Would it be possible that such a system/order/whatever comes that Mourmansk150 has nothing what to fight about and what to say?

… Absolutely! It is our crusade to render this habitat permanently & irrevocably. 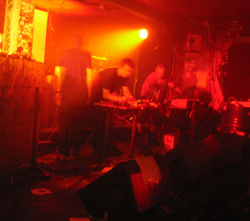 * Progress vs regress in existence overall. Which one is better by you and why?

I don’t fully understand your enquiry? Progression is the only direction unless you are clinically retarded. But the wrong direction can be nominated in which case regression/retreat/reflection and the devotion to a new and better path of escalation should be navigated. The prevailing international precept and practice of “developed” is a concealed plague and must be rejected and replaced. Utility must never replace ability but that’s exactly how the modern world operates/festers.

* Is there any hope for western society? Or the only answer is total annihilation?

There is ample hope. Yes, “total annihilation”, but of the current paradigm, creed, convention and complete vacuum of principles that propel and define “western” society (and a large body of human nature). It’s a moral, ideological and even spiritual war as these sentiments/states are what dictate and deliver the physical reality. All the usual ignorance and greed issues are central offenses but the cardinal failures/felonies are depravity-tolerance and normalization, the tragic desolation of responsibility and the chronic idolatry state so 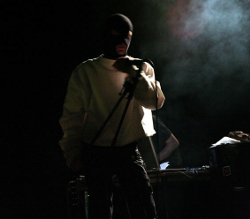 You could devote your life to assassinating Barack Hussein Obama or you could form a PowerElektronix band and just talk about it! Music is really the cowards way out!

NO FUCKING COMPROMIZE!!! EVERYBODY DIEZZZZZZZZZZZZZ