Clo Goelach is one of a few projects that stands in lithuanian noise/power electronics scene. Regardless of various opinions about whether this project realize the idea successfully or not and what means he uses I think that CG is worth mentioning here. Have a good reading.

Hello. Introduce yourself. Who are you, where are you from, what are you doing, how is this beginning of the winter and how are you all in all. 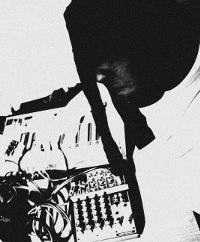 Hi. Well, introduction would be simple - M. Jarackas. I live in Vilnius. This winter irritates me for I cannot stand snowy rain and similar natural phenomenons. It'd be better for everything to freeze - the head would start working. I live not so easy right now - studies, session, but I don't give up and go forth.

Clo Goelach. A little of biography please. The concerts you've played, albums you've released. When, how and why?

The project is not that old. It started in the first side of 2007 as purely experimental project. It swayed from one sound to another but never went too far from the main point (of course there were some deviations, but it was in the very beginning when CG was still not born and I've played in several concerts with Bruzgynai as Machine Cult). I've played not so many concerts, but as firm as possible. Some 3-4 under the flag of Perineum and one during the party of Kunigunda club (with ambient side of CG - Glach). There are three albums already. The first two were "released" just for the narrow circle of people. It was just an experiment - CG - "Until the last drop of blood" (noise) and "Unseen act-wheel" - not very long dark ambient release. And "Streetcleaner Woundfucker", released not so long ago which I think is the real CG.

What were the goals and what inspired to create Clo Goelach.

First of all the surrounding world. It sometimes pisses off so much and become so irrational that I want to take kalashnikov and go hunting into the streets. At first anger boiled inside. I felt the wish to present it in sound. Then I've found PE/noise scene. It was for me and it became my daily routine. Perfect sound to convey cultural shock, terrorism. And because of that the sound beast was born.

Clo Goelach. The name. The man who does not run from the rain of spears. What language is it in and why have you chosen such? What does it simbolyze and what does it mean to you. How does it reflects in your music?

I would not like to go too deep while talking about the name for it's meaning is preliminary. What I've found - it's the phrase of old baltic dialect. The name was chosen for its' meaning declares absence of compromise. It is a wedge going through all moral, social standards and all other rotting dogmas. As for me personally it means not giving up, and fight for my beliefs. 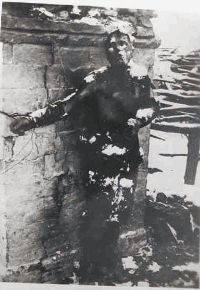 Present your newest work - Streetcleaner/Woundfucker. To whom is this album dedicated, what influenced the creation of it etc.

There is nothing what to present - the sound material is full of pure anger. I've divided it into two parts, two recordings. Streetcleaner is for human fears and dogmas. It is cultural wedge by which I want to inflict shock. Simple text sound in it - "I am your streetcleaner, I will fuck your tears apart. I am all your fears". Woundfucker was created in a rather funny way. It was inspired by one person who tried to tell me that sexual inclination is the phenomenon of human psychology that takes most time and nerves. That's why I decided to create a song about one of the person's weaknesses and dependence.

During your performances, in releases etc. the violence dominates. As I understand you create all the stylistics of Clo Goelach around this. Nevertheless in the scene of power electronics it is rather common thing and cliche. Do you find something new? And what do you find there? How is it related to your real life? How real life influences all these things and how does all this influence your real life?

Yes you are right, CG stylistics spins around these things. I've chosen such because it covers the bigger part of all negative social, political or personal occurences. I find calmness in there for every day while walking on the streets of the cities I see anger and discontent. People suffering inferiority. And here comes CG. It reflects all the negative emotions, wishes, dreams of all the humans as a mirror and supresses them with their own spiritual impotency. I've seen much violence on the streets, in the wars of ideologies and, of course, it influenced my path.

Lyrics of Clo Goelach. Is it harder to create texts or music? Or is it one and the same thing? How lyrics are important in Clo Goelach and how are they important in power electronics overall?

One and another are equally important and equally not-easy though sometimes extremely simple. It depends on inner state. There are days when it is so bad because of experienced negative emotions that it is impossible to transfer them to sound and live it through once more - the mind itself opposes. CG texts are equally important as the music is. It is a "tool" that helps to accomplish the sound terror.

I could not tell you which stylistics are better. The design of the last release was dictated by finances and I am not going to hide that. But when doing a release in DIY, the design becomes colder, "more dirty". At the same time every copy becomes unique. I have no doubt that I will choose the same path for 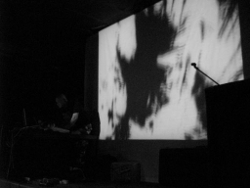 One time I've heard another face of Clo Goelach - more ambient. Was it only a temporary deviation or this project still exist?

It was Glach. From the very beginning it was like CG, but after noticing sound differences I've decided to raise another flag and to create side project. At the moment it is dying for I am very concentrated on the releases and other activities of CG.

Why are there almost none projects of power electronics in spite of some one-time projects etc? Not too long ago Vidine Ramybe showed up, you are here for some time, but it is just a few people. Why is it like that? Is it conservative thinking, geographic location and surroundings, social problems that are not so actual, "better" people or what? Your thoughts.

I think that this is not needed for people still. They haven't grown up to the limit where they could look at the dirtying of their own inner world from aside. They try to avoid negative emotions and at the same time pure truth. But it's great that people appear who starts autopsy of our society. They are starting to revive rusted minds of men. It is possible to achieve only by shock therapy.

As far as I know you were not released by one label because of fascistic texts etc. Please tell me some more about that. What is your attitude towards this political doctrine and politics overall. And about that situation?

Hehe. Yes, there were such oddities. In fact - one. It was rather long ago when I thought that I'd try to release "Until last drop of blood" on some label. Well, I've sent the release at first to rather well known label and when I've received their answer I was laughing to tears. Because these advocates of PE told me that sound material is very suitable, but there are too much aggresion and fascistic allusions in lyrics. What the hell! Label of PE tells me that there is TOO MUCH AGGRESION. They are fucking ******** (here I agree with Mourmansk 150). My attitude towards this doctrine is... symbolic. Because it is only a measure to express some of my ideas in the recordings. There it gets symbolic meaning.

What artists would you mention as the closest, most interesting to you?

Well, it is hard because the list always changes. At the very moment it would be - 1. Operation Cleansweep 2. Folkstorm 3. Alfarmania. But it is not accurate because it changes every day. 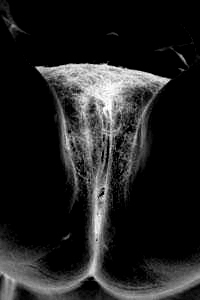 Lithuanian industrial scene. (If not too loudly said). Review it and tell me your oppinion. Labels, artists, genres, what is good and what is bad?

It might sound rather discrepantly, but I think that there never was such a good situation as now. We have labels of two different cliches - Perineum and Autarkeia. Also zines for different cliches - Introspect and TeRRoR. There are more people who plays more aggressive music. The scene comes to life. That is very good. I wouldn't like to talk much about artists because all lithuanian ritual/ambient/amber etc. projects are of no interest for me. They are stuck in their slow and passive sounds and let them be. I say that not because I don't like dark ambient, but I don't see progress of this music in Lithuania. Boring. It might be subjective, but we are talking not about that. But the birth of KLINIKA and Vidine Ramybe and more aggressive and technical sound of Bruzgynai make me very happy.

What should be ideas of project/artist that you would decline it and would not listen to it and go negatively about it right away? Or the sound is more important than the idea? Or how is it with evaluation of releases?

It is very simple - ideas that are opposite to mine. The sound is for conveying of idea. So if the idea is rotten - the sound is empty.

What exactly do you see so bad about the world and humans? Is it possible to be more concrete? If so, try it.

I could not tell it. But I can be more concrete in "spreading feeling of anxiety and psychosis". Such happenings as terrorism, kidnappings, torture on global scale simply lost their shock effect. They became simple occurences of these days. All that is bad and sick is hidden somewhere in the human's inside and tears him. But this is different. It is impossible to identify. Still.

As I understand movies takes not the last place in your creations. Mention some of the more interesting for you and why did they make an impression.

Hm. I abandoned the sphere of movies somehow, but the biggest impression was from "Man behind the sun" which I saw last week. I was interested by the review of this movie in horror blog of Kiras. Later I tried to go to the show of this movie in university, but couldn't manage. And at last I saw it at home. I've seen not single gore movie, but this movie investigates crimes of japanese during World War II, experiments with live humans and animals. And it really made 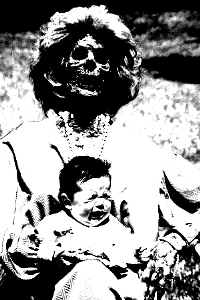 my heart beat differentely. I would recommend to see it for everyone.

Let's dream. Perfect sight that you see when you wake up, open your eyes and go out to the street.

Hm. A the moment it's silly, but I'd like to see doors snowed up to the half. This means I don't need to go anywhere.

Your future plans. Maybe new releases, concerts or something more?

I always plan and they always fail or succeed. The split is planned (let it be the secret with whom) and one more release of CG. Concerts? hm. Maybe. If anyone will invite or if I manage to organize something myself. The time will show.

What book, CD, person and random thing would You take while going to the unknown island for a period of time?

I can say just that I'd take a person.

Last words, thanks and complaints.

Stay harsh to the death!
Thanks for this interview TeRRoR.