Molester is one of not so huge army of Japanese power electronics musicians. This project explores controversive themes of child molestation and other related ones. Person behind this project agreed to give interview for TeRRoR, which I am posting in here.
The language is edited to make more or less readable english sentences with agreement of respondent.

* Introduce Yourself for the very beginning. Who are you and how are you?

I am Hitoshi IMR. I work on noise under the name of MOLESTER. I do live performances and sound source production mainly in Japanese Tokyo. In addition, I sponsor a label specialized in a noise called 'CHI OMEGA INSTITUTE'. I plan a live performance called 'BOU DOU GEKIJO' with noise unit 'DAI HACHI BYOU TOU' of the friend in two months. And unfortunately I am visiting hospital for treatment by the disease of the head now... 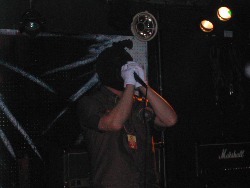 * Your project Molester. I guess it started not so long again. Why and when have you started it? A little biography.

I played the guitar since the age of the teens in various hard core bands. When I was 20, I was in charge of drums in a band of the "post-hard core", so-called FUGAZI and JESUS LIZARD-style. However, once I thought that the normal formation and the music that is traditional, and fitted in the model that is tight. And I thought to begin it with the style that would dismantle a concept (that is to say, introduction of the rhythm or ordinary music constitution or melody) of established music with a free style from the beginning again. I knew BLOODYMINDED, TAINT, SKIN CRIME and BLACK LEATHER JESUS. The agitation that I came across accidentally was intense and I was impressed then. And I tried to make a noise for myself. I taped it as a home taper for a while, but it was recommended to the friend of the circumference in 2007 and I began performing earnestly. Then I worked on was performing with huge force intensely. I am 34 years old now.

* How would you describe the style you are playing with Molester?

The style that I am with MOLESTER is intense noise and intense agitation, the moderate blend of POWER ELECTRONICS or HARSH NOISE. And I put on a black mask and black stockings during performance and particularly express it along a theme. I swing a chain around as the gimmick which sometimes expresses the theme and threaten with a pipe of the steel.

* Was it hard to decide what musical expression of the ideas behind Molester to choose and why have you chosen such as now or simply the overall idea have chosen the style?

As for me, this is the subject which I was interested in, and wanted to handle the theme most. This was decision that needed the courage. For a noise, however, one's this for me - I thought that this theme fitted it most. And I think that this is one of the means of "the real presentation".

* How important are lyrics for your project? Are you planning on releasing the lyrics for wider audience anytime or not?

My text is expressed in very few words, but it is important. Because my agitation inspires my noise. This is not simply noise, I am meaning it and it is a success. However, I submit various effects to my voice for the making of atmosphere. I can show texts if you send E-MAIL to me and if you want to know what kind of text I make. The sleeve notes of my music can stick to a story style on back cover of new work by MOLESTER - 'Our kids, Our business'. But I think that I do not need to attach them in CDr, CD, TAPE as a text card because I sometimes use the considerably radical text. 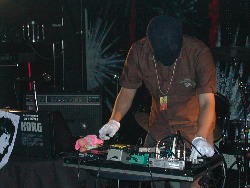 stating the facts and exploiting the molestation thing?

I am an opinion to be both. For me, the theme is the situation of the assailant, the situation of the victim, both things. The part that I direct with a project called MOLESTER and my inside - they are both mingled in my heart. I am also very interested in child abduction, child prostitution, child abuse, the children human traffic organization all over the world. It is "the real presentation".

* Molester is playing live at 12.27 What can one expect coming there? What is Molester during live performances. Do you go into contact with public or not etc. Do you use any videos during your show? How much is live performance important for the artist?

I do not use a video and the projector for my live performances. Because there is no money for those machine parts…Ha-ha. Therefore I put the Xerox art that I make with chain and pipe of the steel, on which I worked a lot and on the stage I'd tear it. I can show my performance directly in audience, making a sound source for me, I am not important at all.

* Is there much of improvisation in Molester albums or everything is strict and to the point?

My performance is the thing which consisted of it to some extent and it goes in the extemporariness abundantly.

* Your favorite "instrument" - pedal, synth, sample, sound or whatever it might be.

I make sounds by analog technique. The synthesizer I use is KORG MS -10, but the dispatch source of the main sound are rubs against metal by my hand and flings of a microphone against a steel plate. I put it through the compact effect pedal which is cheap and make a sound. The feedback of the microphone is an important element.

* You seem to use only analog equipment for your creations? Am I right? So tell me analog vs digital. Good and bad sides?

I use only the very analog machine parts in my work and live performances. I do not use digital machines at all in my work! There is the warmth of the sound there. I saw a lot of people who performed live with a laptop, but they just stood in front of a PC in silence and was worthless at all... And the sound was cold, too... However, I am good at making the sound that is self-satisfactive in a bedroom. 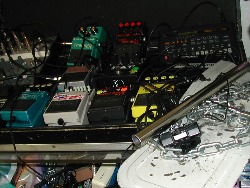 * Is it hard to CREATE for you? It seems that very many people, especially from the noise side release huge amounts of albums and it becomes more of a "factory of releases" and not a creator. How is it for you? What has to inspire you and is it long time till you decide that the recording finally meets your standards?

I make all my sounds very heartily. I understand what I do and that I take the very much trouble, but enjoy this. For me I don't think that quantity is quality.

* Nicole 12 explored similar themes in power electronics as Molester. Have you heard this project and what is your opinion about it?

Mikko Aspa visited Japan and performed live with Nicole 12 the other day. We talked about each other's common points. I could not say that particularly this theme came influenced by him directly, but it felt very close. But I noticed that some of his and my were different. It is the thing which expressed my immorality that "a particular" expression of the theme lies hidden in the shadow and not the thing "which young girls like". It is a certain meaning, a thing such as the social satire. The live performance of Nicole 12 was splendid!

* Many people that have children reacts to these things differently from those who has not. Do you have children? And ain't you afraid that your attitude towards these themes will change in time?

Sorry, I will not answer this question. Because it is no good for harm the people of my circumference by my personal activity. I think that I treat a sensitive theme that much.

* Introduce a little your label "Chi Omega Institute". When and why was it created, what are the future plans of it? Are you planning on sticking to CDr format or there will be more CDs and other formats?

CHI OMEGA INSTITUTE began in 2007. An opportunity came when I got an unpublished sound source of 'CRACKSTEEL' whom I respect, from him. And I released it because I thought that this was important. It is one of the reasons and there was no other label releasing a work of MOLESTER which is my own project. I want to continue releasing the noise that is in the state that "lost a place to go" as much as possible. However, administration of a label takes money and time. I think about balance of that and want to release it with CDr or CD. A cassette tape and an analog record are good, too, but I do not think about it because a cost hangs to press or the postage very much. And the next release is a 'Identity Amnesia' CD by Richard Ramirez. I am preparin it right now.

* What are the main criteria for you in the band/artist/project you hear or get a promo for release? Is it the sound, the idea, something else?

For noise that I release the most important is the sound that "lost a place to go." And we must be congenial spirits with each other. The famous / not being famous does not matter.

* What do you think about overall scene of Japanese harsh noise/power electronics. How is it comparing to other scenes of USA or Europe? And when it is coming to such music and there is a word "Japan" somewhere in description, the first idea is of brutal and extreme harsh noise, but power electronics seems to take very minor position. Am I right or not?

It is just what you say. As for the Japanese traditional noise, harsh and the artistry have many high things, 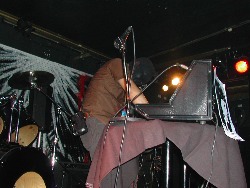 but there are very few people holding of the politics or a social theme of the European and American Power Electronics type.

* Many industrial artists (of course except those that are doing everything just for fun, but I don't count them in) come with a negative attitude towards humanity and society overall. What is your view towards these things and life overall? I guess not happiness about everything triggered the idea to create Molester.

I do not think that the present society is a very splendid thing. I think that the social vice always hides behind in the depth of the human heart. It is different whether who notice it...

I think the book to take 'LES ENFANTS TERRIBLES' of Jean Cocteau, I do not take the CD. Because I think that I make some kind of sounds with a thing out there by myself if I want to hear many sounds…Ha-ha. And the Chinese medicine of the Oriental medicine else. I have a chronic disease in my head.

* Your future plans with Molester and/or other projects.

I maked latest 'Our Kids, Our Business' in MOLESTER now. I almost think that I can circulate abroad. Split Tape with Bruzgynai is going to be released in the next year by PERINEUM of Lithuania. Split CDr with Obsolete (office equipment) is going to be released by Quagga Curious Sounds. I am going to record that within this year. I do sometimes play live with the side project that is dark ambient called 'PRIMAVOXX'. The official sound source is not made yet, but may make it soon. I do not know still, but some time I think I will be playing as MOLESTER in North Europe, Eastern Europe and Russia.

* Last words, swears and wishes for the world or Yourself or whoever.

Thank you very much for interview. I really thank for Arma of PERINEUM and you ! !