* Introduce yourself, please as you see it suitable. What do you do for living, is it a hard day when you're answering the questions, etc.

I'm 30 years old and live pretty much isolated in the middle of nowhere which is how I prefer it.  The city is too overcrowded and ridden with filth.  I work for a company that publishes medical and pathology journals. 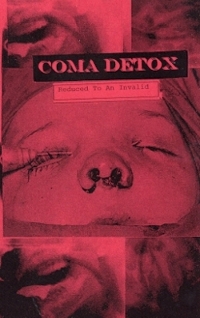 * Coma Detox is a new name in the power electronics scene though the first release received some good words here and there. Tell me how this project was started. Do you have some long time plans or not? Is it the only project of yours? Or there are some others? Maybe of different styles of music or so? Maybe it was just the single release and that's it?

The project has been ongoing for a long time, but now I have the proper space to do recordings in a much more live and loud environment. So I'm able to do things the way I want to.  I've scraped the majority of past recordings.  I sometimes do recordings with a second member, sometimes on my own.  This has led to having more equipment and time to record and practice.  Coma Detox is the only thing I'm involved with right now.

* Who and what was the main influences for "Reduced to an Invalid"? How was this album created, under some influences or not? Did it take long to finish it?

The main influence for this tape was basically my disgust with people in general, how easily people can be broken down, and how fragile they are. People can easily be destroyed by sickness, environment, disease, abuse, etc.  The recording process took awhile because I discarded a bunch of sessions beforehand until I came up with something I didn't want to completely throw in the trash.

* Did the idea of "Reduced to an Invalid" came first or experiments with sounds in a basement?

* For how long have you been into industrial/noise/power electronics stuff? A little of "Coma Detox" background before this release. Is it the first release of yours or maybe there were already some others just not wide-spread?

I've been into rough noise and PE since the mid 90's.  I got into it the same as many people at the time, through Relapse samplers and also seeing random ads for RRRecords and Self Abuse. I bought anything that sounded nasty and interesting, bands like Skin Crime, Death Squad, Macronympha, Taint, Con-Dom etc.   Then, I developed an interest in early material like Mauthausen Orchestra, The Sodality, MB, The New Blockaders etc.  That's still the stuff I mainly listen to now and influences what I do the most.  This is my first release.  I had a short lived PE project around 99'-00 called Rapeday that never really got off the ground.  I experimented with electronics and analog synths for a few years before that but nothing very good.

* Power electronics. Is it the best way to express Coma Detox's ideas? Or is it sounds that goes together with your ideas best. Or what?

I'd say power electronics is a good reference point.  I try to add more elements into the mix than just harsh electronics.  The use of more organic and physical elements like junk metals play a big part in creating sounds as well. 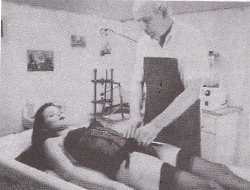 some ideas that was already explored oh-so-many years ago etc. What are your thoughts about that?

After I got into power electronics,  I wasn't  looking for something ground breaking.  Just like a good exploitation movie, I don't really buy a PE release to hear something ground breaking or cutting edge.   That's not to say there aren't some groups out there coming up with original ideas.  I already know for the most part what PE is going to cover and that's why I like it.

* Your first release comes in cassette. Is this format most suitable for your sound expression or what? For some it seems already outdated format to release something in cassettes and they choose to release their creations in CDr or even mp3. What are your thought about these formats?

I think cassette suits what I record perfectly.  I prefer the decayed sounds of analog over digital. A vinyl release would be very nice as well.  I'm not opposed to actual CD's but I don't like CDr's.  I think they are a very unreliable media for the long term.  I really have no interest in mp3's so I would never want to do a release as one.

* "Reduced to an Invalid" comes as a self-release. Why so? You wanted to control every detail of a release or you simply did not contact any labels or how? What about after releasing this? Maybe you've got some proposals already for some next releases?

I just wanted to do everything on my own, at least for the first tape and see how it went from there.  A new cassette will be out soon hopefully, on an already established label.

* Did you ever have live performances? If not would you have/is it possible to see Coma Detox performing live or you are against it/it is too difficult technically? If you've had already, then share a couple of words about it.

I'm not opposed to performing live but it's not something I feel that I'm obligated to do.  I haven't performed live as Coma Detox yet, but if the situation was right I would do it.  It's not really a priority of mine though. 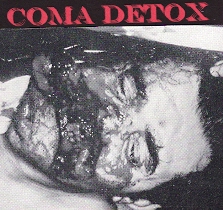 * Though there are lyrics in your album, but you haven't included them. Why? What role does lyrics take in Coma Detox creations? Is it important or not? How much are lyrics important in power electronics releases overall?

There are lyrics but there is no real reason why I didn't include them.  It'll depend on the release if I include them or not.  The lyrics play an important part but I think the sounds are more important overall.  I think it depends on the person writing them if they are important or not.

* As you are from USA, tell me your opinion about the USA noise/power electronics scene. What is good and bad about it? Some names that you would like to honor and some not, if possible.

To be honest I haven't really been paying too much attention to the current scene in the US.  There are a handful of labels and groups I like.  Most of them have been around for a long time.  I'm pretty close minded in my ways and the majority of newer things going on don't do much for me.  Finland and Sweden are pretty much destroying everyone else nowadays anyway.

* Ewa Aulin. Tell me more about your interest or "obsession" in her. I guess it is her whose picture is above the number of cassettes in the release etc? And tell me about women overall. Is it only me who feels this release somewhat more towards them than men or am I mistaken? From the titles of the album and overall feeling while listening to it... Share your thoughts.

Yes that is her small picture on the back of tape cover.  I'm a big fan of exploitation, horror, and giallo films. Death Laid An Egg is a personal favorite of mine so I chose it to be a label for my own project.  Not really too much behind the name.  Like I mentioned earlier,  this release is more about my own disgust toward people in general, low-lifes, overpopulation, junkies, etc.  There is no real  misogyny.   But if that is how this release comes off, I have no problems with that.

* Let's say you have a briliant idea for an album. Would you go on buying some stuff/equipment, what would you buy/borrow. Or you would try to express your ideas with the gear and 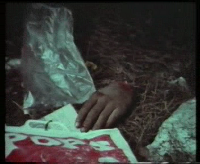 conditions you already own or how?

I really like to work with as little gear as possible.  I haven't upgraded my equipment much.  Once in awhile I'll buy a new pedal but nothing major.  I own a few monophonic synths, and a handful of effects.  Recording is done as simple as possible on analog 4-track with amplifiers and microphones.   Junk metals, oil drums, chains etc. play a bigger part especially on the newest material.

* On what does it depends if you want "to be noticed" in the scene what do you think? The label you release your stuff, the stuff, idea, sounds, place, time of release, relations, myspace or what? How important is it "to be noticed"?

I really have no interest in being noticed.  I'm glad that some people actually liked the tape but it isn't important to me how well known it is.  I don't like myspace or all these blogs, etc. that everyone has.  I miss discovering stuff on my own without having it shoved in my face.  I have zero interest in internet networking.  I think I picked a pretty bad time to release a tape, at least being in America.  Too much bad stuff out there.

* What are your attitude towards politics and towards current economic depression. Is it only financial or also the crisis of humanity, of thought?

I have no real interest in politics.  I see things only getting worse as people are digging their own graves.  Hopefully something catastrophic happens sooner then later.  The economy is a joke but it'll only get worse before it gets better. 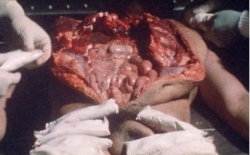 * Meditation through violence. You can crush your own fears only if you face them. And other similar phrases. What are your thoughts about them and how would you comment such thing? Isn't noise/power electronics something like that?

It might be violent entertainment but I don't see it as anything past that.  Violence is part of life and I don't think someone singing about it is much of a big deal.

* What are the future plans of your project and your life? Any concerts, releases or so?

There is material ready for a new cassette that should be out pretty soon.  Hopefully the label likes it as much as the first tape.  I'm in no rush to pump out a new release every month or week like too many are doing.

* What book, record, person and random thing would you take with you to unkown island for unknown period of time?

I don't like islands.  I prefer mountains and trails and I have enough of those close to where I live.

* Last detoxicated wishes, questions, swears, thoughts and so on...

Thanks for  the interest and asking me to do the interview.  Also,  thanks to those who bought the tape whether they liked it or not.