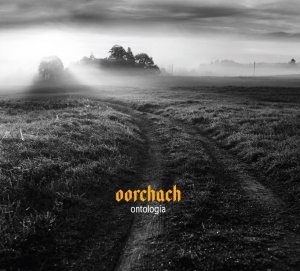 * Let’s talk about your last album – Ontologia. Cover of the album radiates mood of autumn dusk and it seems like the best time to listen what’s recorded on this CD. And what is in Ontologia and why? Perhaps I should ask what was the inspiration for it etc., but I’d better skip this. What is Ontologia and why there is Ontologia?

As you can understand from pseudonym of a photographer (Rūkana, with „rūkas“ meaning fog/mist in Lithuanian), one of her favorite subjects for works is landscapes, drowned in fog. It is also intimate to me so no surprise that these photos seemed highly suitable for the artwork of this album. And overall gray, melancholic distances are not alien for Oorchach. According to the mood, the time of the release is as it needs to be – the time when autumn trails start to deepen. Incomprehensible forms, melting in a mist, raises an ocean of indefinable feelings. That’s the source of a philosophical mood. Ontologia, as one of the main branches of metaphysics, analyzes being and existence. In case of Oorchach, I try to transform this analysis into „sensory perceptions“ that just happen as is and goes without saying. Fields, drowned in autumn chill are an appropriate space for such happenings – forms and their definitions dissipate, spaces and distances change and you can try and taste fully within yourself that lingering… Existence(?)

* Almost 10 years have passed since the last Oorchach CD. There were few tapes during these years. And rather frequent live shows. There was nothing that you would like to perpetuate as an album or you didn’t want that yourself, or it’s just that the „now“ time is the one, or how? These tracks that are on the album, were they performed live ever?

Damn, just after reading this I’ve realized that it’s so long… Reasons for that vary. Several times I had all the material ready with plans to have it in an album, but somehow I could not feel that as a whole. These things happen – rationally all seems ok, but you finish listening to that and feel that some things do not fit the picture. It’s difficult to describe that – you just feel if the release resonates or it’s just a mechanical compilation of tracks. Of course, that „feeling“ is also influenced by many conditions. Sometimes you just need time. I remember lots of cases when after several years you open these „bad“ recording sessions and it all sounds fresh. But of course there is another end of a stick – for some time tapes seemed more suitable format for the direction of Oorchach. Like in „Vigilia“ case. In between these doubts, there were other things – concerts, other projects and simply life/being/alcohol/whatever. As for „Ontologia“, I’ve understood that Oorchach needs musical path manifestation in such album. I’ve collected, harmonized, improved, thought over and here is the result of my own important changes, experiences and don’t-knows. As for live versions – you never know. Details of Oorchach tracks during liver performances transform into other tracks, are modified to the point where they become completely different sounds etc. So one never knows if it’s possible to define as a specific track.

*Ontologia as a term. It’s meaning is clear (knowing what’s the context). However, what is it in relation to this album? While listening to Oorchach I can feel live expression, touching of things and feelings and not attempts to „explain“ them. How is this album different with the rest of Oorchach creations. Or maybe there is no difference and I’m exaggerating with all these questions – there is Ontologia, there is a CD, there are track titles, there is sound. You listen and understand.

You see, in case of this album (and overall Oorchach „message“) this ontology does not try to „explain“. We are talking about unique experiences when you suddenly „realize“ one or another manifestation of existence without imprisoning it in wors. That’s logically ephemeric experience, but sensually – the whole totality. It’s similar to presentiment, showing that there is a Bigger Picture. You cannot fit it all into yourself. If you try to define it, you get only projection of a single moment or imitation in a lower dimension. I like the thought of one Lithuanian art critic that describes something similar. Existential experiences do not shine in one’s consciousness in glittering letters or statements. They are more similar to vague aching. As for direct expression – I think that in case of direct and straightforward experiences (touching the tree, hands getting cold, observing steam etc.) you get a chance for that ontologic attempt to taste what you feel.

*Further on its continuity of the previous question, or maybe not. You cannot confuse Oorchach with any other project – bet it from Lithuanian industrial scene, European, World or whatever. Sound, harmony, presentation and word magic is here-native here-timely „tribal“. Miracles that are happening here and now – light, bread, steam. Do you want to elaborate more? There are lots of people who are searching for explanations of things, feelings etc. somewhere else, but not here. What about you and your sounds?

As you said it yourself, the answer follows the previous one. It’s about these „simple“ things with the straightforward, raw and clear structure of experience with clearly felt details, texture, and features. It might be compared to a scratch – you can understand what’s that by reading a description, but you know it only after you fall down and feel it authentically. That silent authentic, getting above words, is the main driving force of Oorchach. Various phenomena that can still trigger one of the most open feelings – surprise. When seemingly „simple“ things are much bigger in their smallness. Fehu – taste of bread is absolutely different after a day of hiking. And if we are going towards more prose-related themes, maybe the term „tribal“ would be suitable. It’s a pity that for most people it associates with banal quotes or samples of tribal sounds. I’d suggest creating that indigenousness here and now. As for existing of things… You know, the things is that it’s the most difficult task to feel that „here and now“. That’s why it’s similar to the search for „eternal moment“. It’s paradoxical, but more interesting that way.

I can give you an easy answer that „it’s just like that“. Į want vocals in live performances in order to scream out that energy you accumulate when creating sounds. Apart from that, of course, distorted feedbacking microphone sounds great :) Usually, there are a couple lines of text. Some statement or a phrase that can transform into inarticulated sounds. I rely on the moment. Perhaps it’s related to previously mentioned aim to get more into „here and now“ experience. As for „Ontologia“, there was also conscious strategic plays happening. I wanted the voice to be minimal in order to create an atmosphere of these wordless fields, drowning in mist. But what happens with these words that I release? Perhaps they land somewhere in memory, supplementing live experience with sparks of occurrence.