Grunt - Someone is Watching 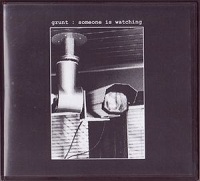 I think no one would be extremely surprised reading statement that nowadays Grunt is one of the most professional and interesting power electronics musician. Besides that, the person behind Grunt is productive not only in industrial, but also in other scenes, as well as in video, printed material etc. For quite some time this tape, released 17 years ago, remastered and then rereleased as a CD, was waiting to finally get written about. Active record collectors, listeners or simply those who listened to Grunt or purchased the huge 10xCD box of old and unreleased material, must have noticed that this project sound changes from utterly chaotic harsh or junk noise to strictly structured power electronics and in every new release, boundaries of sounds and music are expanded more and more. I couldn't dissociate myself from Grunt discography after 1998 and evaluate this work objectively so let this review be a subjective essay about the disc, detached from context. In this CD there are more than 40 minute of sound (Original tape was C-60 and most of pure harsh noise works was removed from CD version), divided into 8 tracks with unifying theme - personal privacy, data and information privacy, surveillance, paranoia, law enforcement forces watching citizens and all these things that became our reality now though in 1998 it might've seemed more like futuristic conspiratorial vision of an artist. Did all these romantic conspiracy themes become boring and dull daily routine and part of our lives now? Soundwisely this CD is very cold noise album with vocals, concentrated mostly at middle and higher frequencies. Tracks are without any clear structure with lots of static noise layers and the album itself is not too pleasant for listener's ears, but that doesn’t mean it's a bad thing. Though I'm not such a big fan of fierce and ear crushing highs, this is done well. Somehow it seems that drone/noise fans should like this album more than me for the overall atmosphere and sounds should fit these tastes - slowly moving layers of feedbacks and loops, sharp sound walls and overall feeling of emptiness and dusk. The fact that "Someone is Watching" has that empty and frustrated feeling, is why it's worth checking out. Also the pitch-shifted up vocal screaming with overall black metal-ish feeling where expression is felt more than the underlying effects, adds to the  weirdness and goodness of this album. "You Can't Hide" stands out from all the other tracks fittin into previous description. This one is calmer, uncomfortable, layered mostly only from samples, and somehow attracts attention while listening to the whole disc. How should I evaluate this? Looking from today's point of view, the theme of this album is especially relevant nowadays and the sound is an example of different Grunt from what you could hear in the latest albums. Of course one could list at least a few albums that sound better than this one, but in its time "Someone is Watching" was truly powerful statement.